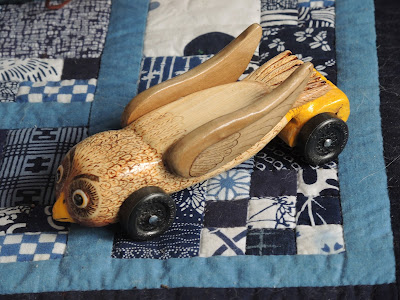 Long ago, when I first began cub scouting with my first son, I only had 16 years of girl scout experience to compare it with.

Suddenly it was a new ball game with parents involved. The first time my son made a pinewood derby car he was a third grader and could make the car himself with only a little support.

When the day of the race came, he was there early and had his car weighed, measured and checked in. As we were sitting waiting for the race to begin, there was one cub watching the door. Suddenly he jumped up and ran to the person entering saying, "Dad! Dad! Have you got the car?" The father answered, "Yes, I've got the car." "Can I see it?" asked the kid. "Yes, but don't touch it", replied the father.  Well, so much for kid-made cars, I thought to myself. Actually, my son's car did not turn out in the design he had first planned but somewhere along the way he noticed it looked more like a shoe so he had added two rows of small nails and laces. We knew nothing about the fine tuning of weight and wheel work and the car was not very fast but my son did feel he was a winner because he had managed to take that block of wood and make it into a car. I did notice that the cars that won were pretty high-tech for elementary school age kids.

A few years later, I became the cubmaster and made a few changes in the race. We began what was called "rough-cut days". We assembled saws and gouges and tools and provided help when the kids came with their drawings. We also opened a category for siblings and parents and leaders. 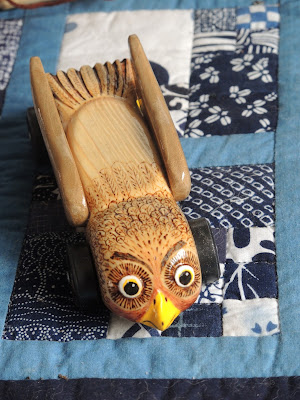 I told the parents to let their kid make his own car.
We helped with the weights and wheel tuning.

I told those parents half joking, "I'm the one to beat!" Thus began a long line of "cars". If you are interested in seeing past car designs, you can go to my awhittlescouting.blogspot.com and click on the label for 2012 and 2013.

After so many years of coming up with car designs, the expectations have become higher and higher and the challenge of doing something new, more and more difficult.

This year I toyed with the idea of making a bobcat.
It is the first rank a cub has to earn and I thought that might give the idea of coming in first.

Well, I googled some pictures of bobcats and none that I could find gave me any inspiration ... and I was running out of time as the race is tonight!

Well, "Owl win", says the owl, so I went with plan B. The only paint I needed was for eyes, feet and beak. I used a wood burner to add the feathers and markings. The wings are added from Magnolia wood and I just added acrylic varnish to help him shine. Several times parents have mentioned they were looking forward to seeing what I will make. Expectations for them, challenges for me!

In the quilting world, I have dug out a few pieces of fabric (all gifted by a friend as I never buy large amounts of fabric unless I have a purpose to use it.) 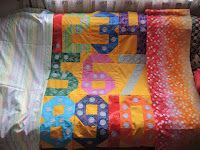 The center numbers will have a one inch strip of the yellow on each side and the finished quilt will have one inch of yellow around the entire border.

On the right is some tenugui fabric, on the left, a pastel stripe. That looks a bit pale but I intend to applique a vine and colored leaves over the strip. The leaves will match the numbers in fabric so will need to show up against the background. 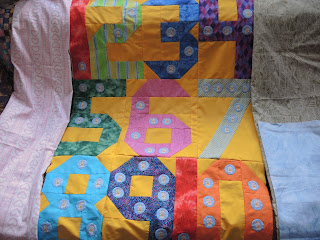 Here are a few more I auditioned.
On the left is a pale pink stripe of hearts that I used on another baby quilt made in the fall.

on the right upper side is a pale olive batik-looking print and below a rather pale blue batik.

I will have to think this over a while. The baby will be a girl so the two left-side prints might be nice with pink.

The blue kind of matches the appliqued cat print but might it be saved for a boy quilt later on?

I wanted the quilt to be the same size as the sister's quilt so the side strips will be only 7 inches. I could cut the pastel strip to feature the blue.
Checking back, I see I used the tenugui fabric on the backing of the sister's quilt. Hmm, another challenge? Didn't I hear somewhere that facing regular small challenges is good for the brain?
Posted by Julie Fukuda at 5:30 PM