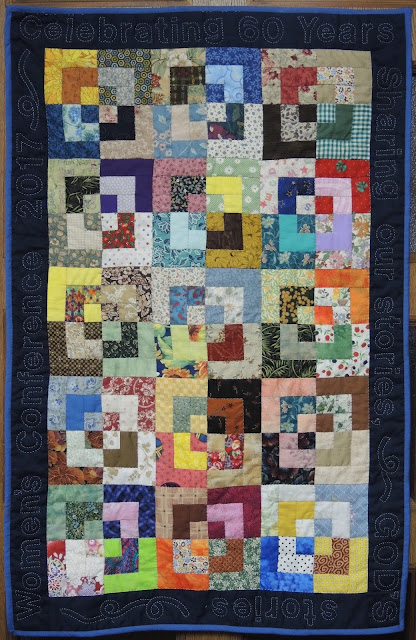 I might say this is all done but I noticed a few of the white stitches came all the way through when I was adding the hanging sleeve, so I will take those out and try again.


Though navy blue seems like an easy color to match, I ended up using a bit lighter blue for the binding rather than have something that was not quite there.
I think this dark blue doesn't distract much from the pattern.

I ended up turning the bias twice to make it narrower and kind of rounded. I think it will wear better that way and I like the narrow look.

The Women's Conference is still two weeks away but now the pressure is off.

Next week will be the quilt show at the Tokyo Dome. Everyone is checking their calendars to find the best time to go.

I have two quilt groups going at different times, one member of my old group is giving a presentation on the 20th and the group is meeting up afterwards for lunch.
I am looking forward to meeting friends I don't see quite so often and I think my other group is going the following Monday when I will be working. My "partnership block" will be in quilt number 61 and Tanya's and Queenie's will both be in number 1. This year the blocks are smaller but it seems there are just as many quilts as usual. Those will be on the list to see, and the show itself is big enough to gobble up the hours. I just bought a new chip for my camera so I hope to get some good pictures to share. I may end up making a second trip later in the show.

Then the following weekend  will be the Women's Conference so this week I plan to make up "kits" for the "Quilting 101" class I will be teaching. Meantime, I am quilting on a table runner of the same design as this for my own coffee table

Wednesday past,  was the first anniversary of Paul's passing and we held a small family memorial by Skype. Norie and Paul's sister came here and we sat together in a row on the sofa for the visit. (I think it was a first for Obachan and she was happy to be part of the clan) With time zones for Boston, Colorado, Oregon, and Tokyo, it is amazing we could pull it off. But then, when those kids come up with a plan ... there is no stopping them! It was a good two hour visit and we are hoping to do it again in the future.

So ... that is it for this week. It's back to school on Monday and the schedule picks up. I have to admit though, it was nice having down time for quilting and getting rid of my cold. Who knows what new germs the kids will bring back from their holiday travels.
Posted by Julie Fukuda at 11:18 PM