Scouting out nature in Tokyo 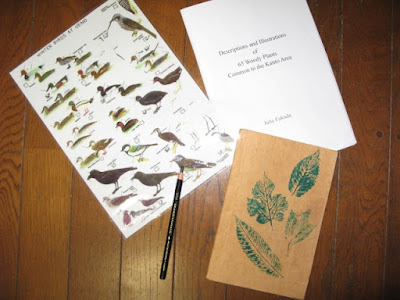 As part of the rank advancement requirements, Scouts have to be able to identify ten native plants and ten animals in the wild.

These are BSA requirements, and though comparatively easy in the USA, trying to get them signed off in Tokyo has its challenges.

There is very little in the way of resources in English, and even parks that label trees use only the Japanese common name, written in Japanese.

Even books that are for identifying plants, often do not have the Latin names.
In 1990, I submitted three proposals for projects to earn a PHD in Commissioner Science, and this was the one selected. I had one year to do the research and illustrations and descriptions and turn them into a usable resource. After all the drawings were done, they were scanned and using a word processor,  were turned into a book by printing each page on A4 paper, folding each sheet in half, and stapling the pile of pages along the open edge. I then added a heavy paper cover.

If you are interested you can view it at this  website http://www2.gol.com/users/fstriegl/scouts/forms/Plants3.pdf A few years ago another Scouter, for one of his Woodbadge training requirements, took the book and scanned it to a file to which additions can be made.

For animal identification, the surest way to find ten is a visit to a lake or pond in the winter when mixed flocks of migrating birds join the local residents. For that, I made a page with pictures of those most likely to be seen at Shinobazu pond in Ueno, a rather central location that is easy to get to. I have a number of those laminated sheets and the scouts can use them to make their own identification.

Saturday morning was the first walk of the year, but as it was still school holidays, there was only one leader who showed up. Norie and Leia came along and I gave her a crayon/pencil to check off her finds. 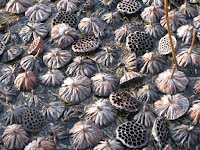 The past two years there has been some construction going on next to the pond and though the pond used to be cleaned out, it has become increasingly choked with lotis plants.

The dead weeds make it harder each year to see the water fowl.

What, in the past has been a great variety of mixed flocks, was down to very few and even some of the local residents were missing. 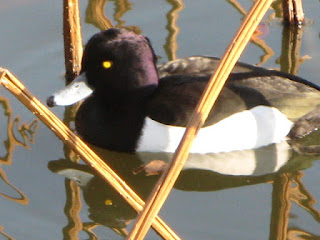 The tufted ducks that usually show in great numbers were only a few among the reeds.

There were coots all over the pond, in and out of the reeds and a few diving cormorants.

There were no Mallards, no Teals, no Wigeons, no Pochards, and not even any Spot-billed Ducks which are a common resident. 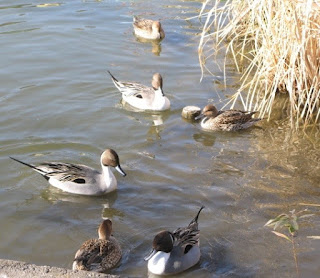 There were a few Pintails but far fewer than the average year.
A few Shovelers but only males...


There were lots of sparrows and a host of domestic pigeons but no Rufous Turtle Doves.

No Japanese white-eyes, no Great Tits, and only one Brown-eared Bulbul.


I heard a Little Grebe once but could not spot it among the weeds. 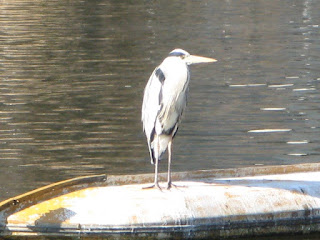 One of the two Black-crowned Night Herons we saw was sitting out on the open on a float in the section of the pond used by paddle boats.


We usually see many more of these in the grasses of a small island.

I think this may be the first time not to see either a Great Egret or Little Egret. 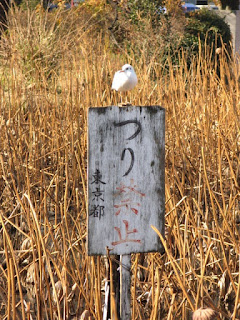 There were vast numbers of Black-headed Gulls.


Many were juveniles and getting into fights with each other in every section of the pond.

Here is one sitting atop a "No Fishing" sign ...

This is a good view of the weeds.
There are fish as I did see the cormorants bringing up small fish to gulp down before making their next dive. 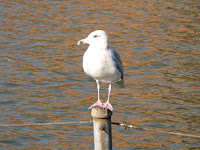 There was one immature Glaucous Gull which was a first for me to see there. 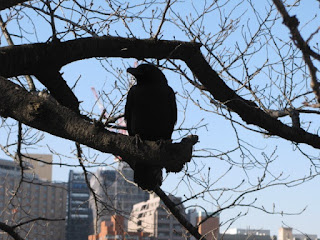 Of course there were lots of Jungle Crows.

Leia was able to check off 13 birds that she identified. Ten would have met the requirements for an 11 or 12 year old scout but I am wondering if they would be as observant as an 8 year old.

I am wondering if it is the strange weather that has kept the mixed flocks elsewhere, or the construction going on ... or the water filled with weeds ... parts that did not look all that clean.

I am wondering if I need to go around Tokyo to check out other ponds. There are a few on the outskirts of town ... not as easy to find or as centrally located. Some cost money to access. Next hike is scheduled for early February so I do have a bit  of time to check other sites. Certainly I will not be able to make up hand-outs for the scouts by then.

Sunday was blustery and very cold. I turned in early because of the early rise for rice patrol.
But ... I kept hearing the rain and wind pounding on the windows and rattling the shutters. It was very hard to sleep. The numbers of homeless had increased but there was enough rice to go around and some got seconds. I counted 78 dead and abandoned umbrellas on my way around the station and back. Some were shredded and some only bent up spokes and some on the move carried by the wind. By noon the rain had stopped and the sky was back to winter blue.

Today was "Coming of age" day and prettier than Saturday's birds were the crowds of young girls dressed in fine kimono. I should have taken my camera when Nikko and I went for a walk! Now that is a sight to behold ... and luckily, this year their pretty white tabi did not get wet and dirty.