With a plan to meet Carin and Tanya in Friday, I was so excited I could hardly sleep through the night. Even though I set my alarm, I was waking up nearly every hour and looking at the time. Finally I just turned off the alarm and got up to take Nikko for her morning walk, checked and re-checked the train schedules and maps ... as if I had never gone before ... and set out on the mobile sardine can.

Tokyo keeps talking about "getting ready for the 2020 olympics" but from my point of view, they still have a very long way to go. When I got off the train, there were lots of signs... mostly in Japanese ... about making connections to other trains. Well, I knew the "Dome" was closer to the Marunouchi train station so, seeing the big red "M", I set off that way. Going through the gate there was a word, "Dome" and an arrow pointing to the left along with lots of other words and arrows in Japanese.

I set off in that direction but no further signs. I ended up doubling back, checking every underground gate for a possible sign and worrying that I would be late for our meeting. Finally I just picked an exit and came up above ground. Great! I could see the roof of the dome in the distance. I pulled out my map and wrote "Exit 6" in the margin for future reference, then hurried off to the meeting place just a few minutes behind schedule. Oh my, there was a huge line of people waiting to have their bags inspected and go in.... and luckily, just to me right side was Carin! Hurray, we were off.

First stop was the partnership quilts. Both Carin and Tanya's blocks were in quilt #1. Tanya has already posted pictures of the blocks but I can't resist a bit of duplication. 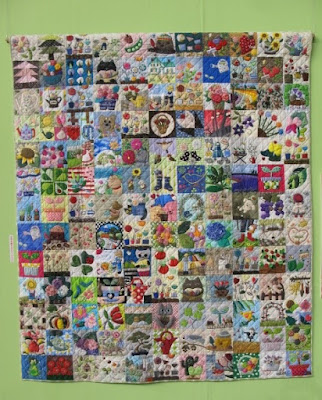 This year the walls behind the partnership quilts were painted green. Not too bad.

The blocks were made smaller this year. Each year there are over 60 quilts and if they were thinking smaller blocks would make fewer quilts ... well, there were 8,910 blocks submitted and 63 quilts. About the same as other years.

The project of assembling and quilting these quilts falls on a different well-known "sensei" or teacher and her disciples.

This year the teacher was Eiko Okano. Sponsored by NHK TV, there is a show with a few demonstration blocks. Even if you do not watch the show, it is pretty easy to guess which blocks were in the demo because there are multiple ones of that pattern.

This is quilt #1 and there are a few of each of patterns except for one with a bridge.
Maybe for quilt #1 they wanted the most variety.
There doesn't seem to be much else of a plan, 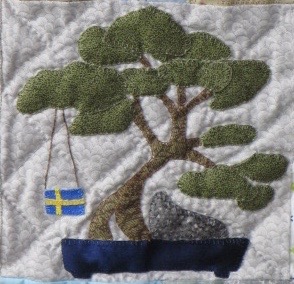 Can you find Queenie's block in the above quilt? 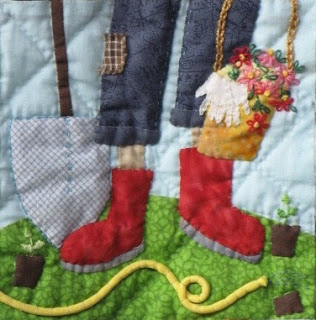 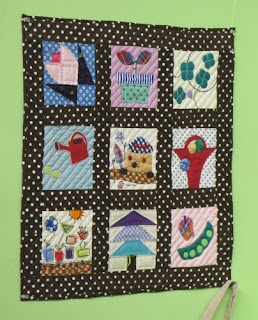 These are the ones suggested by the sensei.


I think you can find at least two of most of them. 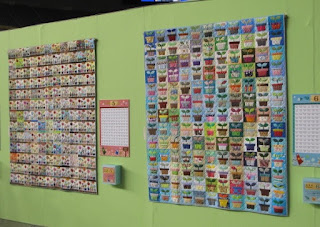 Next to each quilt is a posted sheet of names,
arranged in order to indicate the makers of the blocks.

and ... below the sign is a box where you can deposit a raffle ticket (or if you really want that quilt, many more at 500 yen each ). There will be a drawing at the end of the show.

In these two quilts you can see a large amount of similar blocks. They almost seem to be competing with each other. 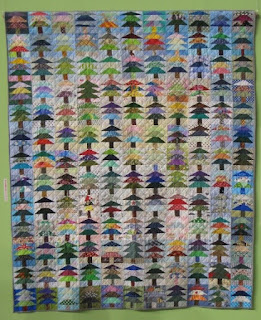 Though the theme was "Garden", this quilt looks more like a forest.

Here there seems to have been a plan to put blues and greens around the border and the lighter backgrounds toward the middle. 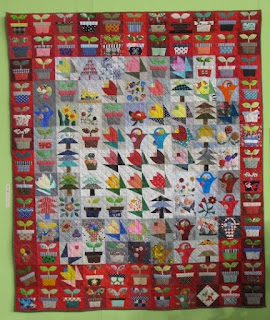 This one has red backgrounds and potted plants around the outside.


It might be that some people met in groups and worked on their blocks together because many blocks seemed to have used the same fabrics. 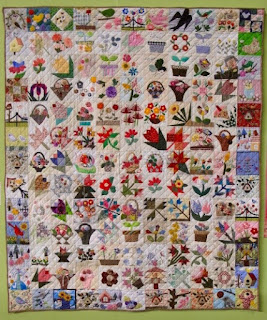 This is the quilt #61 that has my block.


My Ohio cardinal is planting his sunflower seed in the left border forth from the bottom.


There are a few more bird blocks and a few birdhouses. 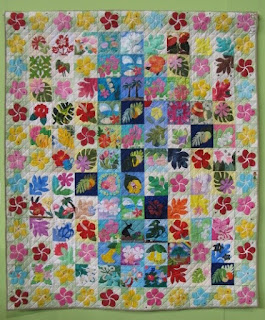 And this one seems to have mostly Hawaiian style designs.

Tanya posted one with a forrest border and a large mob of moles in the center.

All the quilts were hand quilted with diagonal lines forming a square grid on point. The quilting was only in the background areas and stopped short if the applique designs.

I have no idea how many disciples a sensei has, but these quilts are a small single bed size and there were 63 of them. Assembling the sandwich, quilting, and binding, even with some help must have taken no small amount of time

Please look on my blog list and visit Tanya and Queeniepatch to see more of the show ... and better pictures than my camera could get.
More to come ........
Posted by Julie Fukuda at 4:21 AM