OK, I have fed hundreds of mosquitoes and my glasses are wet on the inside from sweat and wet on the outside from rain. My body is rusting and my brain is getting green with mold and mildew.

It is a good thing the solar eclipse is not happening in this neck of the woods, because there would be a lot of disappointed people. 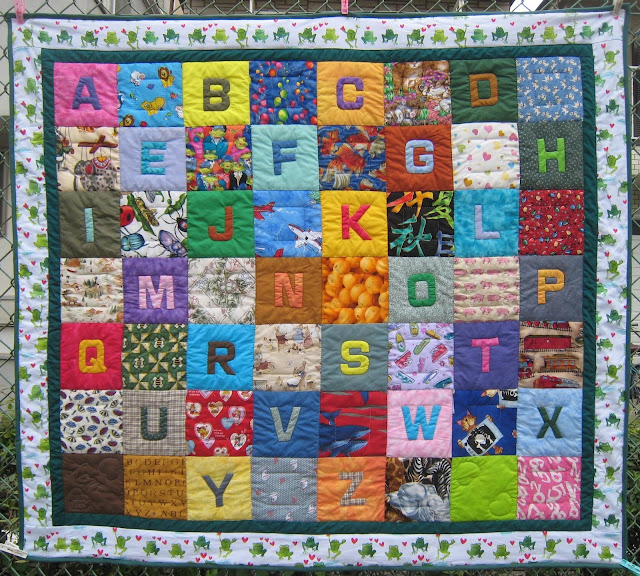 The baby quilt is all done and ready to hand to it's new owner tomorrow.

My "Quilt Diary" that began with a paper notebook, where I pasted photos of quilts as they were finished ... along with size and comments about the process and date maybe started and finished, is falling behind.
In the old days, the pictures were taken on film and the rolls sent to a shop that developed the film and printed the pictures out. Those, I trimmed and pasted in my notebook. Then, I used to have a photo printer. I could connect my camera with a cord, put the desired photo on the display, and push the button and the picture would be printed in a few quick moves. Now that printer is dead and I am falling farther and farther behind in recording my finishes.
There is a printer at the "convenience" store and I think there might be even a button to push for directions in English but the language is really not english but computerese.
I am going to have some catching up to do because some pictures are not on my camera but on my cell phone.

This quilt was a simple pattern I have used before but there were quite a few snags along the way. First the red fabric I had used on the K and behind the Q turned out to be a very bad running dye. I decided to replace those two parts which meant some un-sewing and re-sewing. Then, when I finished quilting the blocks, I got out water and a paintbrush to remove the purple marking lines. Oops ... the pen I had used was not the water-removable ink. It did run a bit and I added more and more water ... now bleeding purple onto the backing. Finally I mixed liquid soap with the water and brushed on more to both the front and the back. After letting it set overnight, I washed the whole quilt in cold water with several color-catchers, and hung it over the bathroom bar to dry. Whew! Finally it is suitable for gifting and my part of the drama is over.
The offending red fabric has been banned for life and the purple pen has been banned from the marking tools box. Lessons duly noted.

If someone has a bit of excess sun, I might find a way to trade it for lots of excess rain. ENOUGH already!
Posted by Julie Fukuda at 1:22 AM