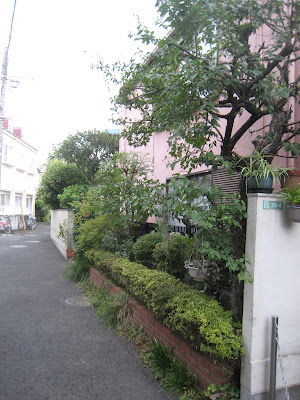 The other day, when the newspaper guy came to collect for my paper delivery, He asked me about my front "garden" which I usually take care of from season to season.

Since I had been away for a month, the Vine-leafed Maple had shot up in front of the second floor window and the plum tree was against the house.

Also the lace-leafed maple had become so thick with branches that the plants on either side were almost completely hidden. Knowing which branches to prune out is tricky with maples.

The guy knew that I usually did the trimming but he made me an offer that would have been hard to refuse ... less than what I have paid in the past for professional pruning which results were not to my liking.

This guy brought a young man around as promised this morning at 10:00 and the three of us discussed what I wished to have improved. 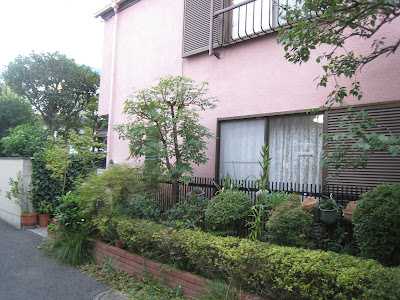 I wish I had "before" pictures to show. What an improvement!

All the cuttings were carefully cleaned up and taken away in his truck. (I think last time I was cleaning up cuttings in the under-brush for weeks).

Just as he finished, it began to rain.

I would say the garden will be very happy. I had him leave the gardenia nearest the gate as it had buds getting ready to bloom, and I can trim that bush when the flowers are finished 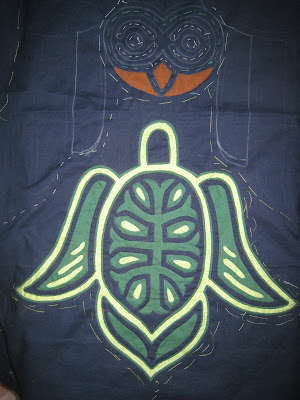 Meanwhile the mola got a bit more attention.

This is not coming out as I had planned. I think it is rather difficult to figure out the order of cutting and turning when the technique is completely unfamiliar as it is hard to see as far ahead as needed when planning.

Maybe I should have gotten a few books with instructions before just jumping in.

The next baby quilt is still being arranged.
The I-Spy blocks are only four inches square so I am going to need to mark and cut more ...

And then, the sashing strips ... I will need to lay it all out to adjust the balance of color so I really can't begin to sew until it is all arranged and pinned in strips.

Sometime this week I am planning to go to a quilt show. As I recall, this show does not allow pictures but it is a very good show and one of my quilt group friends has a featured part.

Here's hoping the rain does more to lower the temperature than to add to the humidity. The garden will be happy and I am hoping I will be too. At least I have something pretty to look at.

Email ThisBlogThis!Share to TwitterShare to FacebookShare to Pinterest
Labels: Mola