I was wondering if I added all the hours of clear blue sky we have had in October, would it even come to a total day's worth. Well, I think the six hours we have had so far today might push it up to that much. 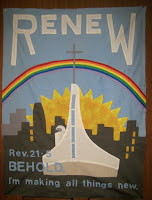 At least the inside time has allowed me to finish up sewing all those little letters on to the banner.

I still have some words to go but I have decided to embroider them in a curve below the rainbow. Appliquéing all those curvy lower case letters was more of a challenge than I wanted.

I will also add details to the church building with stitchery.

After taking this picture to send to the committee, I spread it out on the floor and basted the sandwich. Now I will be able to move this to take-along work ... starting tomorrow on the way to Gotemba for the choir retreat. As I recall, at last year's retreat I was working on the quilting on last year's project. 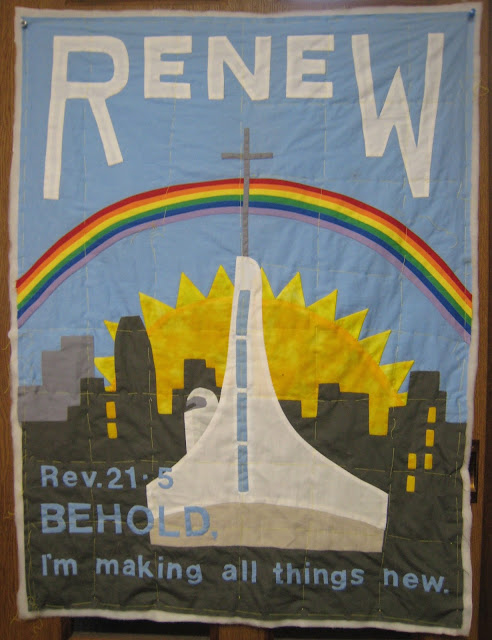 So, here is the basted piece. This is far from my favourite but if it meets expectations, I will be satisfied. I do miss my husband who could take the drawing and have it enlarged to make a pattern.

Now, maybe I should find an excuse to go outside and grab a bit of that sun before the next typhoon moves in....
Posted by Julie Fukuda at 9:08 PM

Email ThisBlogThis!Share to TwitterShare to FacebookShare to Pinterest
Labels: Banner 2017