Not much quilting to report ...
even though my last post was ten days ago.

We have had rain, rain, and more rain, and it seems to be fogging up my brain. The 13th was my regular Cub Scout pack meeting and it was after 11:pm when I got home. I was to go to the Boy Scout Friendship Patrol-o-ree but decided to get some sleep and leave early Saturday morning.

I woke several times to the pounding of rain on the roof above my futon, and though I had set the alarm for an early rise, I over-slept. Then, I couldn't find my car keys. I thought I might have left them in the car when I went to get the camping gear organized the day before so Nikko and I set off to the car park. Nope! No keys there. Then I walked along our dog-walking route to see if I might have dropped the keys on the roundabout way home. Nope, no keys. Then I came back home and went through all the bags and pockets again. Yep, at the very bottom of my rain jacket. Bad me! I usually hang the keys on the hook right inside the front door when I come in but with the dog and carrying stuff from the car, my attention to detail was not working.

By the time I set off, the traffic was super heavy so I ended up taking the "expensive" route using the expressway. Even that was slow with traffic, and when I finally got through the gate to the camp, the cars were stopped on the lower road because there was a cross-country run going on.  I have to admit I was not a lot of use to the program once I got there, but it was really nice to meet so many of my Scouting friends ... some of the Japanese Scouters I had not seen in many years. I had to leave before the campfire ... no idea how that went as it was dumping rain all weekend ... I had to have Nikko walked and be out the door by 7:00 am Sunday, because the choir was singing at the early service. I was glad I didn't have to find some place to dry and fold a wet tent as we have only had half a day of sun all week.

Monday I overslept again and ran out with Nikko for rice delivery. I was an hour and a half later than usual but with heavy rain, even though the trains had begun running, there were lots of homeless in the B1 and B2 basements and 30 packs went out quickly. It was much later than usual when I returned home so I grabbed a quick bite and set out for school, happy for the water-proof shoes my son bought me a few years ago. 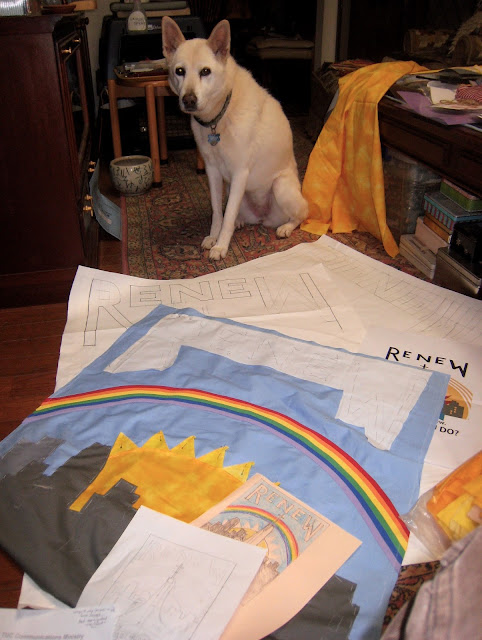 Nothing getting done on the mola ... It is time for making the next Stewardship banner so I have been measuring and marking and cutting and now beginning to sew. I have been dragging my feet on this one as the theme selected is "Renew". The church basement/fellowship hall is in process of renovation so the committee thought it a good theme. I am wondering what "renew" might mean to those who have never made any commitment in the first place ... but dithering has put me behind the curve. So ... if there are no posts for another ten days, don't be surprised.

I woke to rain on the roof today and it is still raining. This weekend ... from tonight through Sunday ... is another Scout event ... the Order of the Arrow ... that I always take part in, leading the "Brotherhood walk". It was still not known last night if there were any Brotherhood candidates going to be there so one of my brother scouts sent a message that he would take my place if needed. I will be glad to stay home tomorrow ... skype with the kids ... teach english, and SEW! There is a typhoon heading in our direction ... supposed to arrive in time for rice delivery on Monday. Hopefully my brain won't get any more mushy than it already is.
Posted by Julie Fukuda at 1:12 AM

Email ThisBlogThis!Share to TwitterShare to FacebookShare to Pinterest
Labels: Banner