Is it really autumn?

Higanbana! In the continuous heat and humidity of Tokyo, how did they know that autumn is just around the corner? 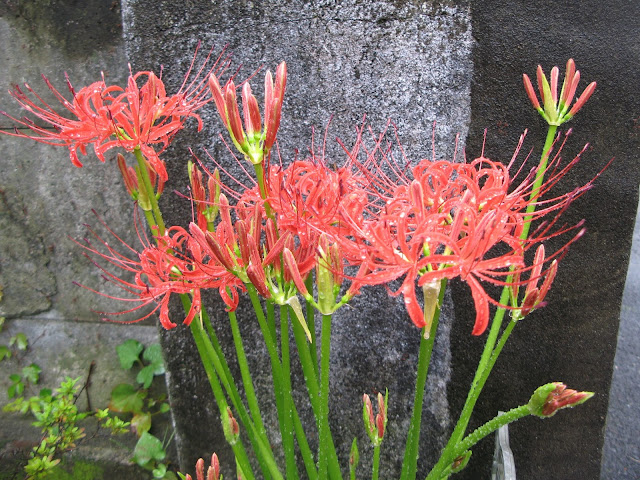 Higanbana - Lycoris radiata - is a member of the amaryllis family, and often known as spider lily.

Higan is the word for the autumnal equinox in Japan, which is a national holiday.

When I returned from our former house in Suginami, I brought with me from that large garden, a number of bulbs with little room for planting them all. I took the leftover bulbs and planted them around the neighborhood, these are some  that have thrived and multiplied over the years. (in the raised bed of an apartment building two houses away.)

I also planted some in a neighbor's weed garden. It is an area between their house and the street surrounded by a low cement wall about one foot high and maybe a yard wide, with a fence on the house side. Mostly what grows there is weeds and maybe one or two small bushes randomly placed.
As far as I can tell, those neighbors do not pay much attention to that plot, maybe pulling out the weeds one day a year when they get too tall. Therefore, I was rather surprised that when the spider lily bulbs I had planted sprang up beautifully at the back corner of the plot, they were all pulled out within a few days from the time they opened.

Since then, I have seen other bulbs in the park being pulled out and learned some new things about that plant. Often, in Japan, that lovely flower is called "flower of the dead". When it blooms in autumn like violently shed blood, rising straight out of the ground, it is time to get serious about ghosts that haunt winter nights.

Higan translates to "other shore" ... land of the dead. It is the day to visit family graves and pray for the well-being of departed souls ... and take care of unruly, potentially vengeful souls of ancestors.
I am not so sure about how Japanese think of ghosts, but I remember my neighbor going out in winter and cutting all the swaying branches off a weeping willow across the street. When I asked her why, she said it looked like an obake or ghost. I also remember her pulling out wisteria vines, saying if they are planted in your garden they will strangle the owner to death.

The higan holiday is still 8 days away. 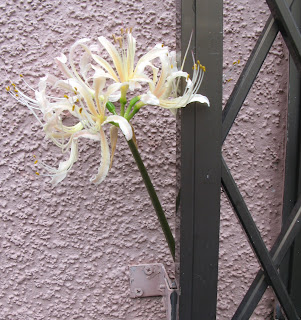 This pale pink version has also sprung up on the east side of my house.

Others along the west side have yet to break the soil, but they do get less sun there.

Perhaps, like the gardenias, they burst into bloom when the length of dark and light become close to the same.

The leaves will not appear until much later after the blossoms are finished.
The bulbs are poisonous and are thought to keep hole-digging vermin like moles and mice at bay.

Now, as I contemplate these traditions, I wonder about the arrival of halloween. Hardly even heard off 55 years ago, it has now been so embraced by communities, that the shops began to display halloween decorations out in front on the last day of august. There are even costumes you can buy for your dog! There is a grand parade through the streets in front of my church. And young people in Japan really seem to like costumes and dressing up. I wonder how my older neighbors feel about embracing witches and ghosts and skeletons ... and things that go bump in the night.

Hopefully, the rain falling now will bring some much needed cooler weather and not just more humidity, and I can get back to my quilting projects ... maybe something to show other than what nature has produced.
Posted by Julie Fukuda at 8:33 PM