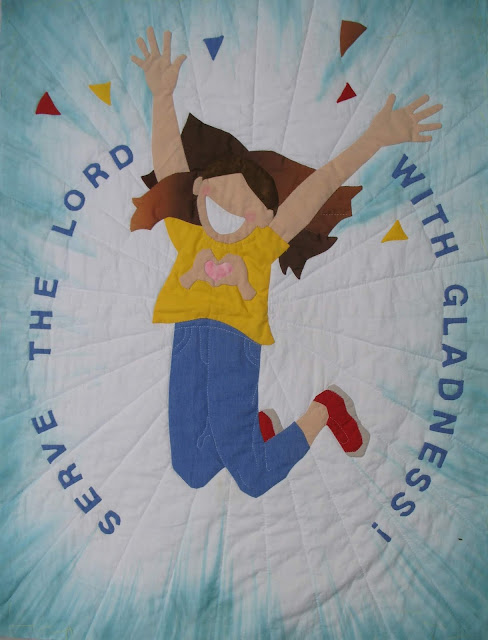 What a week!
and it isn't over yet!

Monday, between early rise for rice delivery and school, I had to visit an unknown health center in Minato-ku to get an x-ray (to prove to the school that I don't have TB).
That meant riding the packed train during rush-hour ... not the best way to start the day!
Along the way afterwards to school, I stopped at the home of a friend who had some blue and white yukata fabric needing a new home.

Well, how could I turn down that opportunity.

Had I known the size and weight of the bag she had packed for me, I would have taken a roller-bag!
Travel for me, to school and home, went suddenly to a snail's pace (but worth the effort I am sure.)

Tuesday morning I had to run out early again for an interview/talk about the changes that have taken place in Tokyo and Japan since the earlier olympics.
All that was filmed for a movie. I was so fortunate the church let us use one of the small meeting rooms in the newly renovated fellowship hall.

I often notice the changes taking place from those early days ... things that never seem to change, and things you thought never would... The gentleman doing the project was warm and friendly and fun to talk to, and certainly opened my mind to even more stories of my time here.

My take-along work stayed in my bag, and when I returned home in the afternoon, I basted the letters on to the banner before setting out to an evening meeting back at the church.

Wednesday, I finished appliquéing the  letters in place ... right through the batting to the backing, so I will not need to quilt around them. Needing some background quilting, I just added rays to the borders.
I had bought some buttons for the eyes that seemed just perfect. Black, round with a low rise ... but, now they just seem too large when put in place, so I hope I can find something similar but smaller. The shop had some that were very round and intended to be used for eyes, but I think I will have to take the banner there and see how they look before spending any more money.

The binding will be next, then the hanging sleeve at top and bottom. There is still a little time left ... but ... teacher/boss passed me her work coveralls on Monday with a big hole needing mending. This is the third time to repair that same suit, and I tease her that she seems to be running through barbed-wire when I'm not there.  Then, my fellow choir member passed me his winter pajamas that need some elastic.
Meanwhile, tomorrow I leave for the Choir retreat in Gotemba. There will be lots of practice on pieces for "Choir Sunday" and some special music group. The site is the YMCA, and has a lovely view of Mt Fuji ... which I have been told has a cap of snow already. (after such a hot summer, the snow comes much earlier than usual) As long as it is at the top of Fuji, and not in my garden, I can take the unusual weather.

I will take the banner to work on during down-time. Guess  will have to be careful not to spill wine on it during our evening activities. Hopefully it will be finished by the time our Stewardship campaign begins in November. 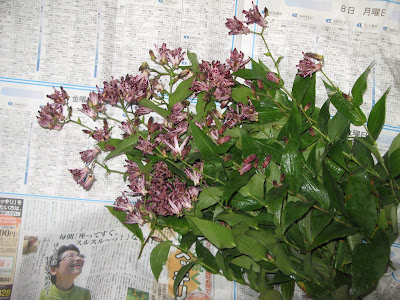 Yesterday morning, on Nikko's walk, as usual I go through the park.
I pick up the poop in a bag and fill the bag with weeds ... usually the ones that are developing flowers and will soon be spitting out seeds.

The house next to the park has a beautiful garden, so the lady is glad to see those weeds along her fence being removed, and she called to me and handed me this big bunch of "hototogisu".

This plant is named after the Japanese Little Cuckoo, small, shy, hiding in the woods. The English name is Hairy Toad Lily.

Anyway, I had to come home and find a few more vases, as this made two large flower arrangements and one vase was holding Tuesday's flowers. I have a few of these growing in my garden, but they did not do well this year because of a bug attack . I have never picked them to enjoy in my home but the vase sitting on my coffee table reminds me how much I look forward to their blooms ... and again how grateful I am for kinda and friendly neighbors.
Posted by Julie Fukuda at 6:46 PM