Not a lot of progress

Last week was Vacation Bible School and I survived as leader of the games. Though the booklet gives a choice of three games each day to fit the theme, most of those involved either water or a large outdoor space. For example, one game involved tossing a beach ball into the air and doing a challenge like "do a pushup and stand back up", Because a ceiling limited how high the ball could be tossed, I bought a variety of balls and some feathers. Then I let the kids come up with a challenge and indicate which item to toss in the air. I think it was more fun than what was in the plan.

The hardest part of the day was riding the sardine can into town and back each day. I had to be out of the house by 7:am, which meant it was rush-hour and no chance of sitting at all. With Nikko in a declining condition, that also meant getting up at 5:am to walk and feed her and wash down the mess in the genkan. At least tiles are easier to wash than the wooden floor, but a most days I was mopping up pee and couple of times poop... mashed down and tracked all over. One day I came down to scrub up the pee and take her for a walk, only to find a second washing needed as I was on my way out to the train. At the end of the week, Norie and Leia came and stayed over. They took Nikko to the water tap in the park for a washing. Much easier than going with her into the shower.

I have finished sewing the backing for the floral quilt and now just need a space to lay it out for basting. I could use the upstairs apartment floor, but it is way too hot with the power shut off so that project is on hold.

This week I went for the first step of a dental implant. When it was over, I went to the American Club where there was a scheduled Board of Review for an Eagle Scout rank. It was lucky I could make it because had I not gone, there wouldn't have been enough people on the board. It was 10:pm by the time I got home and I was glad to skip dinner and get a good night's sleep.

With weather just too hot and humid to do more than walk the dog, I began my challenge for next time friends meet for the quilt show. Our challenge this time is "Circle". 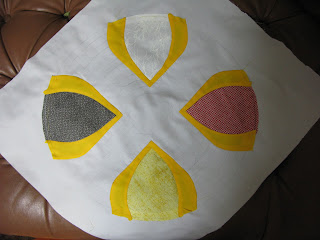 I am thinking of a native american mandela, or medicine wheel.
I have begun with the four colors representing directions, North, South, East, and West. In the past I have used a form of this for meditating.

I have also spent a few hours daily for sorting and ironing the "gifted" fabrics. I am about finished up with the huge pile of yellows. They had been pulled out originally to work on the sunflowers of the last two table runners.

(actually, those two runners were misplaced on the Pastor's last day and are yet to be found. I wonder if they ran off to South Africa in one of the suitcases.)

So, this is my recovery week and the schedule is more calm than usual. I kind of wish that floral quilt was basted so I could work on it. Typhoon season has arrived but not giving the Tokyo area much other than occasional showers. The garden is happy after a month of heat but it is rather annoying to have to carry an umbrella whenever I go out. ( It seems to hold off the rain but even so, I return wet and dripping from perspiration anyway.)

My Saturday english class is cancelled this week so I may go to the homeless dinner that afternoon. If Nikko is having a good day, I might take the floral quilt to baste on the floor after the meal. It has been a while between posts so it might be nice to have some progress to report. 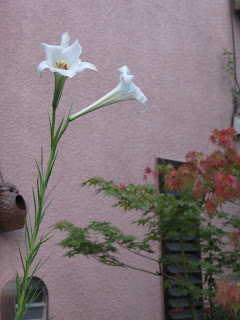 The volunteer lilies look more like Jack's beanstalk this year.
Maybe trying to get closed to the sun.

The Maple tree leafed out red this year. What I thought was one tree with two trunks, seems to be actually two trees. I am also noticing a difference in the bark as they get older.

This past week the red leaves have been dropping. My neighbor's maple is also dropping leaves. I think many plants are confused by the mixed up weather.
Posted by Julie Fukuda at 6:01 AM