Another flimsy flapping on the fence

I was finally able, with my daughter's help, to buy enough thinsulate for my log cabin quilt. It is now laid out on the apartment floor waiting for basting. What is holding it off is the summer heat and humidity. The electricity is off in that unused space and each day is so very hot.

Meanwhile, I had Vacation Bible School for the first week of August, and since the program activities were about nature, and written for children living in the states, they had to be tweaked to fit Tokyo. Leaves, bugs, birds, and animals and stuff for nature crafts had to be rounded up.

The days began with an early rush hour ride in the crammed sardine can subway, Only the youngest, fastest, and most aggressive got the senior sitting. I felt like a minnow swimming upstream in a typhoon! Ayway, I survived and hopefully the kids enjoyed the week. Then, the next week I was playing catch-up and getting ready for my Friday Cub Scout meeting

As it turned out, I heard from one parent that the cub had a fever and would not be coming, but I went early, set up the room with chairs and table for activity, and waited. Half an hour into the meeting time no one had come, so I slowly began folding the chairs and taking them back to the storage area. I got the room back to empty shortly before our usual closing time, and hauled my roller bag of materials back to the train station. The good thing is, I have something all ready to go for another meeting later on. It was gusting and rainy with the edge of a typhoon passing through, so I am not surprised that parents hesitated to drag their kids out in the storm. 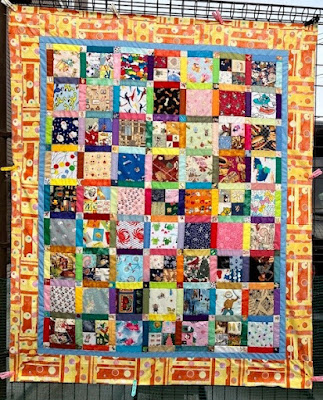 After the VBS week, I decided to make an I-Spy quilt for the new children's ministry director to use while the kids are gathering or waiting for parents to pick them up.

I had a tin of 4inch blocks already cut and plenty of small solids to use in sashing, so this did not take much time.

Next will be to face the heat and get both this and the log cabin flimsy basted so the quilting can begin. I have a labyrinth wall hanging on my to-do list at the request of my Boston Daughter. I might be more motivated if it wasn't so difficult (bordering on impossible) to mail things larger than a small letter to the states!

The end of the week, my car will go for it's three-year inspection. I get to sit on the room and wait some hours, but it is air conditioned and would be a good time to work on quilting. That alone will be my motivation to stagger up to the apartment floor and get to some basting. Hopefully the day will remain cloudy.