The art of the Japanese Tenugui 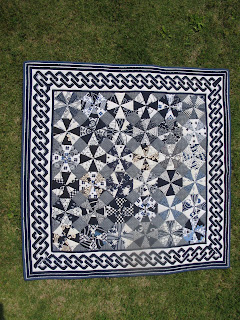 In earlier posts I have sometimes shown a quilt backing which has been composed of Japanese tenugui or cotton towels. Indeed, many of the quilts I have made use tenugui either on the back or as part of the design. Sometimes I get questions about tenugui so today I thought it would be fun to show and tell more than you may wish to know about the art of tenugui, and indeed, it is an art.

I have sometimes referred to tenugui to be seen along the lines of postage stamps. Although I was a poor student of history and geography, I loved to collect postage stamps. They were like tiny travel posters showing the nature, historical events, places and people that defined a country.
Each country puts out lovely commemorative issues and they may be used on letters as regular postage or kept as collectors items. We can learn a lot by examining these stamps and they are small enough to be stored in albums.

Tenugui are rectangular cotton hand towels. They were sometimes distributed as gifts by shops or firms commemorating their opening and may contain addresses or the phone number of the shop. The tenugui of yesterday has gradually been replaced by terrycloth towels and handkerchiefs and many of today's tenugui are pure art to be looked at as well as used. We used to have a tenugui of the Tokyo Tower that had been framed and hung as a picture by my Father-in-law. Sometimes they are sewed into bags or cushions or noren, a strip curtain dividing rooms. They are often used as stage props in kabuki, rakugo (comical storytelling), and Japanese dancing.

The process by which these towels are made is as fascinating as the towels themselves. Both Yukata (a cotton summer kimono) and tenugui are dyed as a strip of fabric. That bolt or roll is anywhere from thirteen and a half to about fifteen inches in width. The cloth is stenciled with a kind of paste that works much like wax in batik. It is done in sections and folded back over itself like an accordion. The length might vary depending on the ultimate use but one roll is usually enough to make one yukata with some bit left over.

After each application of paste, the dye is put on top of the pile of fabric over a vat of the same width and sucked through the pile. Then the excess dye and paste are washed out, and the fabric dried and re-wound for further dying or cutting into lengths. 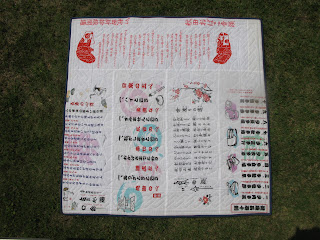 The price can range from around five hundred yen for a two color towel of simple design to thousands of yen for real works of art.
The series of childrens' games on my last post cost around one thousand two hundred per towel a few years back when the dollar/yen was about 100 yen to the dollar.

The small kaleidoscope quilt has five towels on the back. The writing on the red one is a poem or song. The other four show a sense of humor, such as advice on manners and replies to requests and the like. 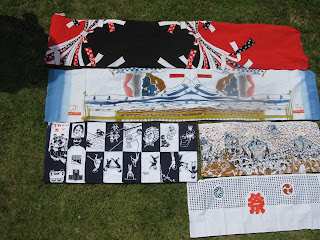 I have photographed some un-cut towels and you can see how each section is the reverse of the one before. If the design includes writing, one has to be careful to put the right side facing up as it is impossible to tell one side from the other by just looking at the pattern.

The two top towels have a design depicting strips of cloth being stretched out to dry. The blue and white towel can be folded in half lengthwise and then accordion folded to form a cloth book. This piece of art shows the variety of ways to use a tenugui, from a blindfold for a children's game, a head scarf, exercising, fishing, bathing and even picking fruit. The towel with many people is of a festival. The people are carrying portable shrines and they are all wearing tenugui as hachimaki or headbands to keep the perspiration from their eyes. The lower towel with the red character says "matsuri" or festival and that is the type of towel most often worn as a hachimaki. 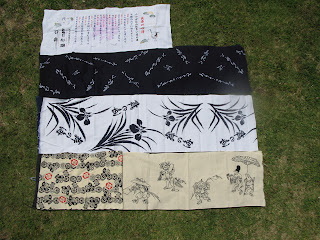 Here are a few more forms of towel containing writing. The top is advice on how to live a long life. Actually, it is a list of funny excuses to give when your maker comes to call you home. The dark blue is writing by someone having reached the auspicious age of 88. The iris on white is the name of a Sumo wrestler who may have presented these to his fans upon being promoted to a higher rank. The beige towels show some folk art. 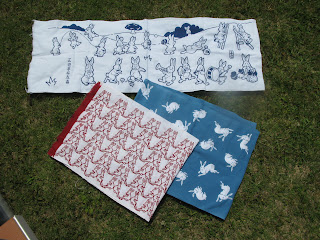 This year many of the places selling the towels had a selection of rabbits as this is the rabbit year by the oriental zodiac. Several quilts I have made for my grandchildren feature zodiac animal towels on the back. On one I asked family members to sign their names on their animal. 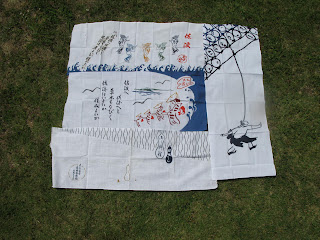 Just like stash, these towels tend to grow in numbers in dark places. Unlike postage stamps they take up more room. I have a set of three plastic stacking drawers and in true librarian fashion, the towels are folded and placed by topic. They might be festivals like those above, famous kabuki scenes, sumo wrestlers' hand prints, scenes from famous places, flowers of various seasons, and just like postage stamps, interesting bits of culture. Some may find their way to the backs of quilts. Others are old that have been given me by people clearing out their cupboards. I once made a purple quilt for my SIL who loves purple and just went through the pile pulling out any towel with purple for the back. Most of those were from Japanese dance school recitals or kabuki actors assuming a family name.

The cloth tends to be more loosely woven that modern print cotton. It is surprisingly durable and the colors are fast. It is quite soft and less likely to slide off a child's bed. Because of the variety of lengths and widths it is not easy to piece into one large back. It can be pieced along with yukata fabric but is noticeably different from regular cotton prints in texture. I would offer some to anyone interested if they thought they might be able to find a use for it. Then, again, I still have three cat panels looking for a home.