Star Crossed goes to the festival 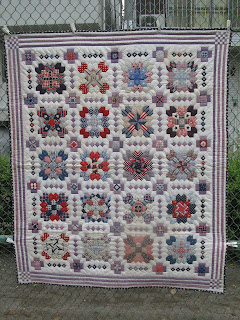 Years ago, when I was performing regularly with the Tokyo Piping Society, a small group was asked to play outside a Tokyo department store to draw attention to a "Festival U.K. '98 "that was being held inside. When we had a break, I went inside to see what the "Fair" was all about. Along with British goods there was also a small quilt show and one quilt by Lucy Boston caught my eye. It was all done in lozenge-shaped hexagons and, I think, called "Stars and Crosses". The interesting thing was the variety of patterns that could be made with just one shape. I took out my notebook and made a sketch of the general design before going out for another piping session.

As time went on, that sketch in my notebook kept calling my attention and I decided to try that pattern out. I had begun assembling a selection of red, white, and blue fabric for another quilt I had in mind so decided to limit the color to that just to try out the design.

This pattern was particularly good with striped fabrics and somewhat fussy to do so I only made 20 blocks as a test. I swore at the time this would be my last adventure with hexagons but that was not necessarily the case. I named it "Star Crossed" because I was doomed from the time I first saw it. Later I made a full sized quilt of the same design and named that one "Double Crossed". 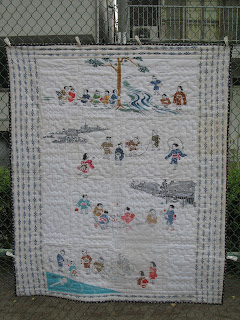 The backing was made from Japanese Tenugui, printed cotton towels. These four are of Japanese Children's games. When I showed the quilt to the elderly man who made the towels, he was delighted to sign his name on the lower towel. Since them I have acquired a set of 17 of these towels and am thinking I may again use them for a quilt back.

With Blogger down and my computer having it's dying spasms, I am a bit late to post for the Bloggers' Quilt Festival. I will give it a try but the computer guru came in and re-arranged everything and I'm not too sure I can link in or add the button. The quilts are great and I could spend the whole day looking at other's posts.

(LATER) I have spent a frustrating two hours trying to figure out how to get that button added but nothing has worked so far. You can check them out by clicking on Amys Creative Side on the right side of my blog.
Posted by Julie Fukuda at 3:52 AM