You may think that when a quilt group meets, they quilt. Well, we eat too and when we were sitting at the 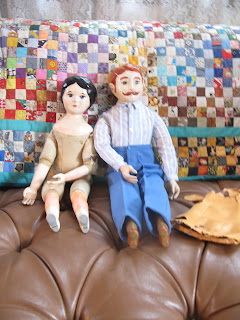 table, attention went to these dolls sitting on the shelf. I had taken them out for my granddaughter to play with and found they were falling apart. I don't remember how long ago I made them or how old they are now. Maybe one of my daughters will look and comment. (I do know some were still babys because one of the kids bit the nose off the girl doll and it had to be fixed.)The lower arms and legs are carved out of wood and the heads are made of paper mache. The girl doll was made first and her body was made from pigskin. The boy's body was made from deerskin and was first to deteriorate. Neither could take the rigors of play and needed new bodys. Long ago I had bought a piece of peach muslin for that purpose but had not gotten around to making repairs.

I had made my own pattern to make the dolls in the first place and had not saved it. I decided the time had come to get these fixed while we had granddaughters to enjoy them. I began with the boy doll because he had completely fallen apart. You can see beside him the body section. Taking out the stuffing, I traced them to make patterns. I was hoping to get the size about the same so the clothing would still fit.
I dressed him from time to time as I went along to make sure of the length if legs and arms was OK.

After fixing the boy, I was feeling better about taking the girl apart. Now they are both in good repair and waiting for a little girl to play with. 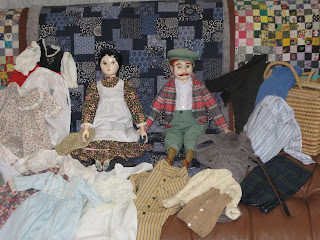 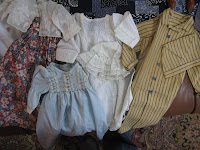 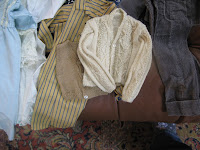 All the clothing was made without patterns and stored in a basket with a button lid. A lot of it needs to be washed. The girl doll is wearing a dress made from fabric I used to make a dress for my eldest daughter so they would match. The night gown for the girl is smocked and the tan striped nightshirt for the boy has a night cap too. There were a number of knit pieces too. The boy's sweater is still in good shape but the vest has moth holes as do many other pieces. The boy has a dress kilt and a tuxedo too. His grey corduroy suit has slit pockets and huge cuffs. Hmmm, when were those cuffs fashionable? The girl has more dresses as she was made first.

These days you can buy Barbie 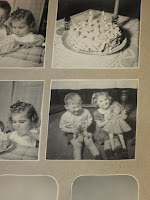 dolls and find a whole selection of clothing on toy store shelves but when I was growing up, your dolls came with only what they were wearing when purchased. I got my first doll on Christmas when I was three. Her name is Alice. She came with a black wig which I didn't like so I played with her very little.

On my fourth birthday she came to my party with a blond wig and can be seen in my arms in frequent pictures from then on. I do not recognize the dress she is wearing in the picture. Probably it is the one she was wearing when she was purchased. It was from this year I began to sew, begging scraps from my mom so that my doll had clothing for every occasion. An interesting note is that the teddy bear my twin brother is holding was intended for me on my first Christmas. There were two and I got the brown one which I still have, dressed in clothing to hide the bare places where his fuzz was loved off.

In those days there were no patterns that I know of for doll clothing. There was the depression and then a war and luxuries were in short supply. If a kid wanted something, you had to figure out how to make it! In many ways I think that was a good life for children. My own children, too, had lots of fun making things and even as adults have kept the creative spirit alive. It is not unusual that during some visit we spend a little time looking over some project one of them is working on and figuring out how to solve some challenge they might be facing. 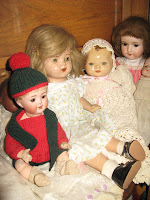 You have seen the owls. Here is one corner of the doll shelf where Alice sits today. Beside her to the right is "Little Love", my second doll. Both are wearing homemade clothing as are the others. (there are four more shelves ... just like the owls, they tend to gather)

Well, this is a quilting bolg, not a collections blog, and if you look behind the dolls on the sofa, that bit of blue is a quilt I started to make many many years ago for those two dolls. I found it in my fabric box when I was hunting up that peach muslin for fixing the dolls. That was before the days of UFOs. I guess now that the dolls are fixed I'd better finish it up... or maybe get off this computer and get busy on other waiting projects. Strange it is, the things that side-track us!

Email ThisBlogThis!Share to TwitterShare to FacebookShare to Pinterest
Labels: dolls