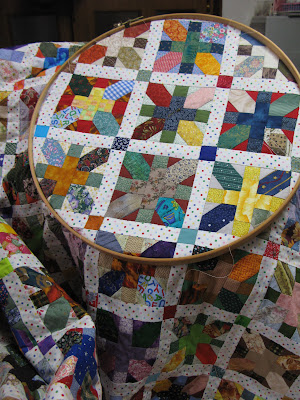 It is going to take a long time, but the quilting has begun.
Since these blocks are rather random fabrics, I decided that quilting in the ditch is probably the best way to go.

After spending half a day crawling around on the floor at my rice store friend's tatami room, I had pinned and basted and un-basted without ending up much farther than I had begun.

In the end, this was mostly basted with safety pins. There will probably be some final adjustments to make while quilting so I have found the center block and will try to work my way out to the borders, hoping any lumps and bumps will get worked out.

The layers seem to be flat and I am not expecting much trouble ... as long as I keep working from the center out. I am thinking I may add a sparkly twist-em to that pin in the center block so I can keep going evenly and not get lost in the process..

I have this on my large floor hoop now and I can pile all the edges up on top when I go to do other things. That prevents Nikko from lounging on the edges. Goodness knows, there is already a ton of dog hair in this quilt without adding more! The days are getting colder and I am looking forward to snuggling and quilting.

Meanwhile, there are a few more projects nagging for attention. I need to make a gift for the Women's Conference speaker by the end of January. I also have to do some work on the ASIJ Gala quilt ... drafting patterns from my drawings. Then there are all those signed pieces of fabric from the church's 140th anniversary gathering to figure out how to use in a hanging or banner.

Meanwhile, tomorrow I hike with the Cubs through Kamakura with the Japanese Scouts, during the day and attend a Far East Council  anniversary Gala in the evening. Then Sunday is "Choir Sunday" and we sing two services. Following that I race off to another Cub Scout activity in the afternoon. Monday will begin very early with rice ball delivery to the homeless.

I remember my twin brother always complaining, "I'm bored"! My mother would suggest things he could do, none of which had any appeal to him, and I just couldn't see HOW anyone could ever be bored ... there were never enough hours in the day to do all I wanted. Over seventy five years later, I am still scrambling to make time for all I want to do. 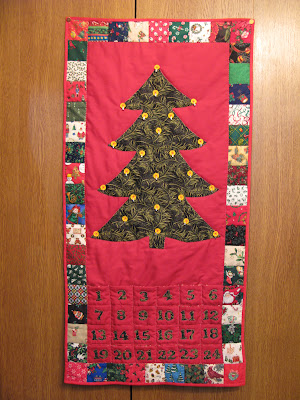 And there are a few things I needed to begin a bit earlier on.

This advent calendar ... well, the hanging part ... went flying off to my daughter. I didn't get the wooden decorations carved and painted but she has some older ones we made long ago that she thinks will work.

I had the pieces all cut and in a baggie with my knives, thinking I would work on whittling them during the BSA-SAJ Friendship Patrol-o-ree weekend. Little did I know that "helping" meant running one of the stations.
I really prefer to make all that mess outside but now it is getting a bit cold for whittling in the woods.

In addition, I remembered after cutting all those pieces, that I had planned to make 24 different kinds of birds to go in that tree. For another birder in the family, that might be fun but would take a whole lot more drafting and cutting. Too much procrastination causes delays.

I read on other blogs about all kinds of presents in the works so I know I am not the only one on a count-down. I hope you all have a happy and productive weekend as December rolls in... and no boredom!
Posted by Julie Fukuda at 1:38 AM