Our Quilter's Book Club book for October was "State Fair", by Earlene Fowler. I finished to book some time ago but only had time to think about the block to represent this book in odd moments between other activities.

I am hoping eventually to assemble all these twelve-inch blocks into a quilt. I have so far been able to include at least one piece of paisley in each block. That fabric is mostly a rather dark red, and while I like it, I would like to have the end quilt a wee bit more colorful.

Looking through several books of block patterns, I find many of them are limited to just two or three colors. The block named "State Fair" had few colors and I ended up with a block named "Mystery Block". However, when I put that block together, I was not very happy with the rather bland result. I decided to substitute the center four inch piece with a four inch version of the "State Fair" block. It was rather fussy to draft in four inches and I am not a big fan of un-sewing, but I do like the end results. 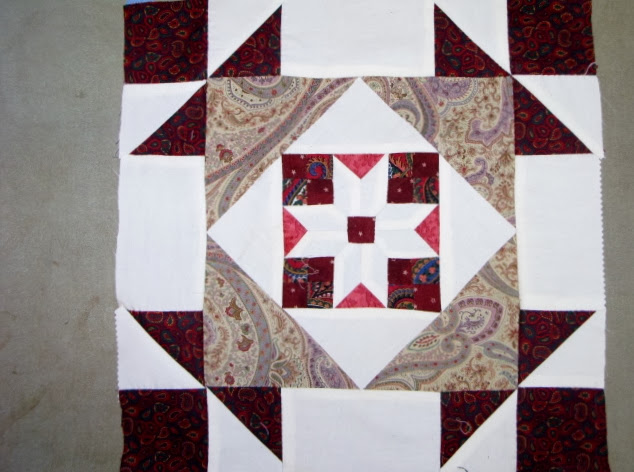 The colors don't show so well in the four-patch but I am more satisfied than I was with the tan paisley center square.

November is over but I have not yet finished the book. I have been struggling to read the stories on my computer but .... Yesterday morning, things began to look up considerably. My birthday gift from my son, Ken, arrived in the mail .... and included was the paper copy of "Aunt Jane of Kentucky", November's read. I have started back at the beginning and this time am enjoying that book. I have yet to think of a block but that will come in time.

The December read? Yes, that was in the box as well. In fact, I'm all set for the winter, thanks to my son who knows how I love to read.