With my battery charged and a brand new chip in my camera, I was ready to head out to the train station. My husband said I should take a picture of him, just to make sure I had the chip set right. 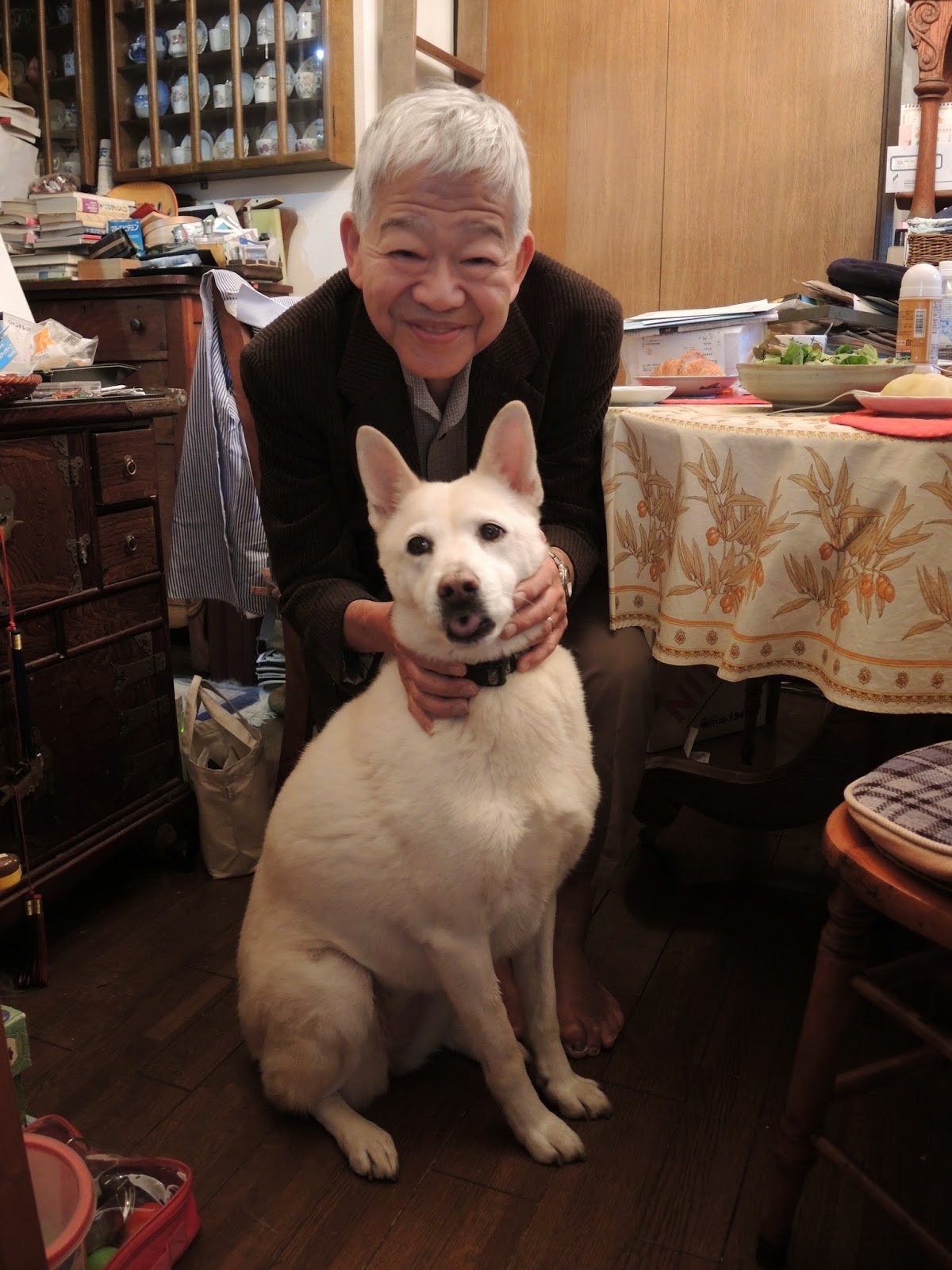 Actually, Nikko will do just about anything for cheese and you don't have to hold her head.

Yep, camera is working, I've got my train schedule and even remembered my cell phone just in case. Off to the mobile sardine-can! 860-some yen and I had to hang from a strap for the first hour of the trip! So much for senior seats! 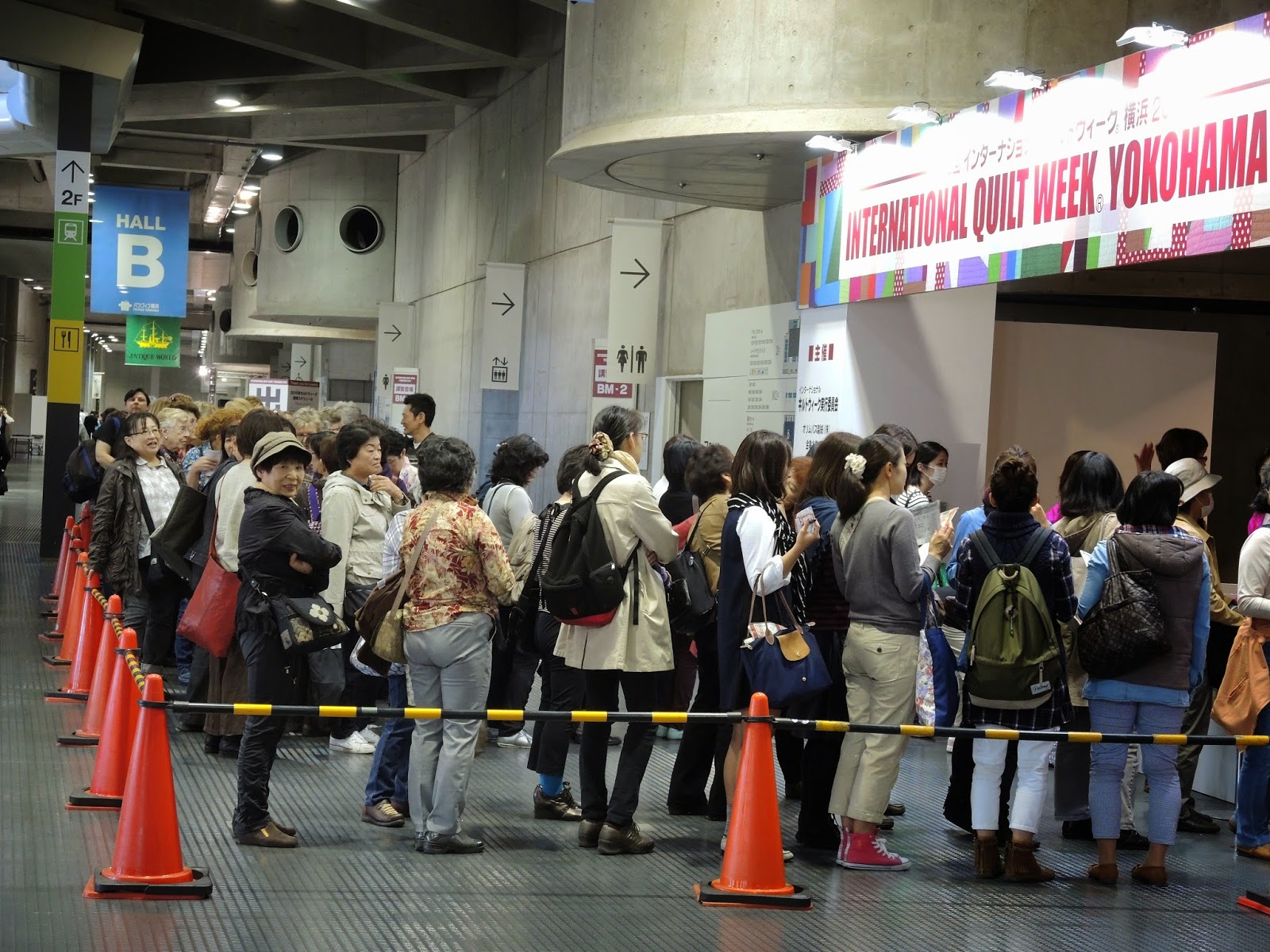 As I came down the escalator at the site, the line was building up in front of the entry.

This is the third day crowd and among them a good number of foreigners. There was a large tour group coming from Australia, and my Friday group had a contingent too.


I met up with Carin and headed in with map in hand and a plan in mind.

Some of the first places we viewed requested no pictures. Those were special exhibits by well-known quilters. Probably many of those quilts have been featured in books or magazines. We did notice an improvement in that many of the names of the quilters represented were written in English.
Also, the exhibit areas were covered by volunteer staff in pink smocks, and many of those spoke to me in English. Though conversations quickly switched to Japanese, I was pleased to see that an event that calls itself "International" is working in that direction.

Some of the featured exhibits were "Colorful World of Kaffe Fassett, (we saw him giving a presentation to a standing-room-only crowd), Kathy Nakajima, (who usually has an exhibition spot featuring her Hawaiian quilts), Fumiko Nakayama's wonderful Mola quilts, (saw her giving a talk too), Faculty showcase ... whatever that means, and quilts by previous judges.

Yoko Saito had a spot and there were "Japanese Quilts" by Yoshiko Katagiri. There were quilts from Korea and Taiwan, "Tail of Genji" quilts, and a few other exhibits where photographs were not allowed. I felt I was watched because I had a camera hanging around my neck but I saw many Japanese and foreigners taking pictures with their cell phones and I-pads. I see many wonderful pictures on different blogs of quilts taken at shows in the States. I have only been to one show there (except for museum shows) and pictures were allowed everywhere. I wonder why pictures are not allowed. Certainly those taken are more "snap-shots" than anything that might be put in a book.

Well, the contest areas DID allow photos and some of those were astounding.

The first area we viewed was a Miniature Quilts "Star challenge" ... in fact there were several challenge areas and all of those were quite charming. The "star challenge" gave each participant three small pieces of three different fabrics. 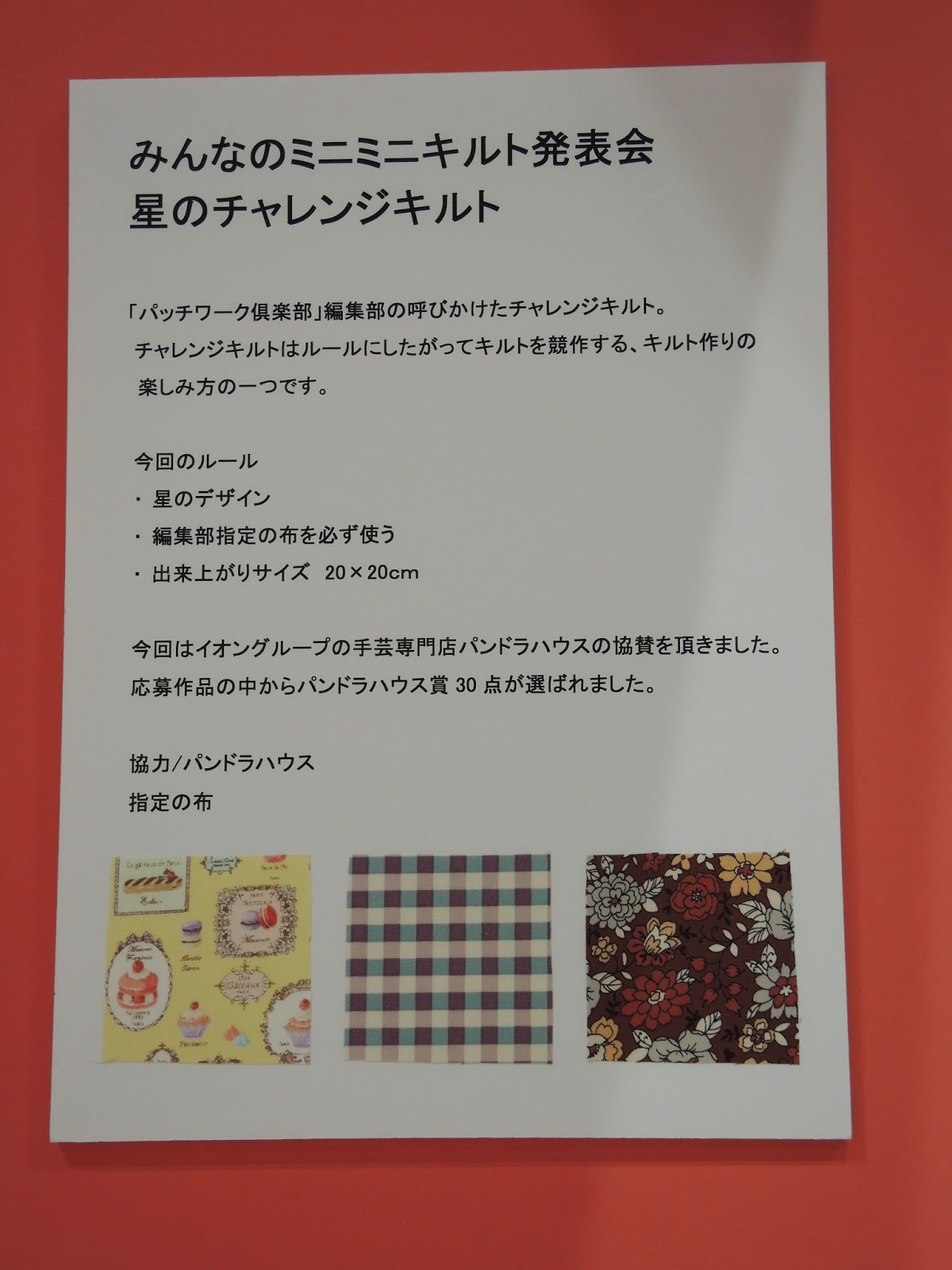 You can see them on the poster below,  a yellow print with small pictures printed on it, a purple and blue check on a white background, and a brown floral print with yellow, white and dark red flowers.

The rules were to make a star design.
Use each of the three fabric bits somewhere in the piece,
and finished size, 20 x 20 centimeters.

There were plenty of star patterns but there were some that were not readily easy to spot. Some of those feature fabrics were easy to see but just as many were very cleverly hidden.

There were a few with little ribbons attached which I assume were given special prized. 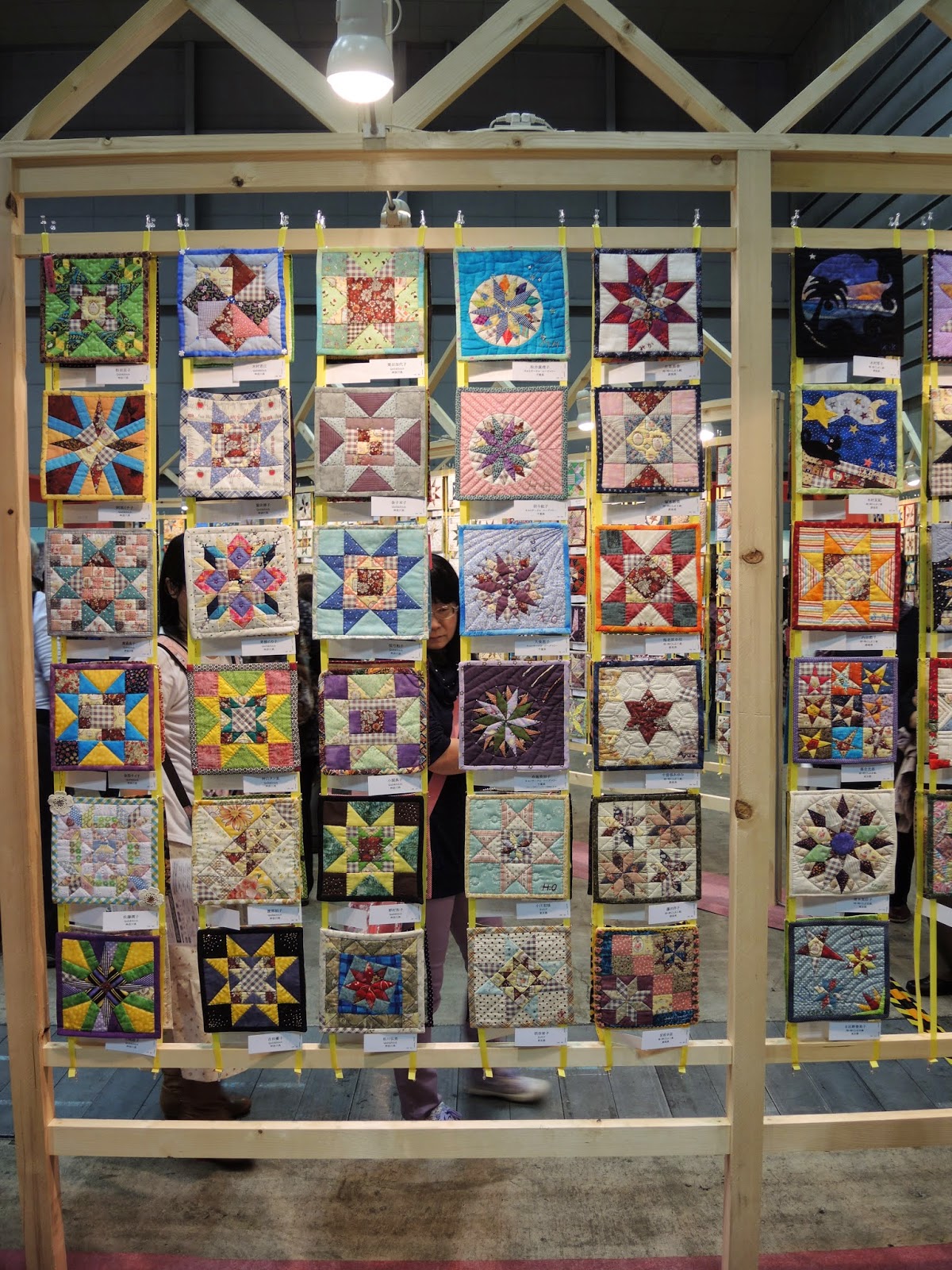 This is how they were displayed.

There must have been several hundred of them.

They reminded me of the "Partnership Quilts" at the Tokyo Dome show. In that case, the blocks have a theme but no fabric requirement other than size, and they are placed in quilts that are then raffled off. 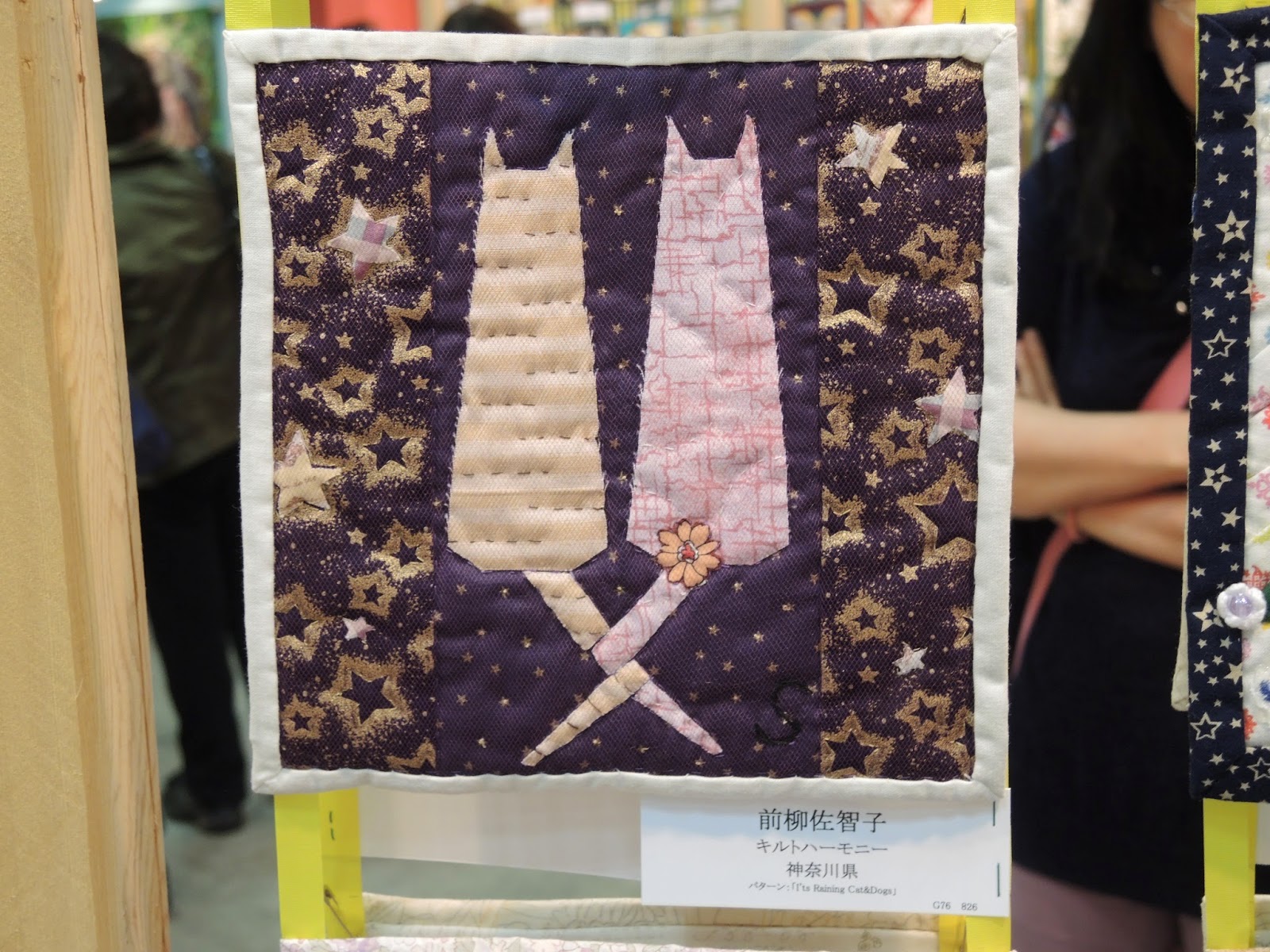 Here the stars are in the background .

One flower from the brown print is on  the cat's tail and the other two fabrics are appliqued in the stars. 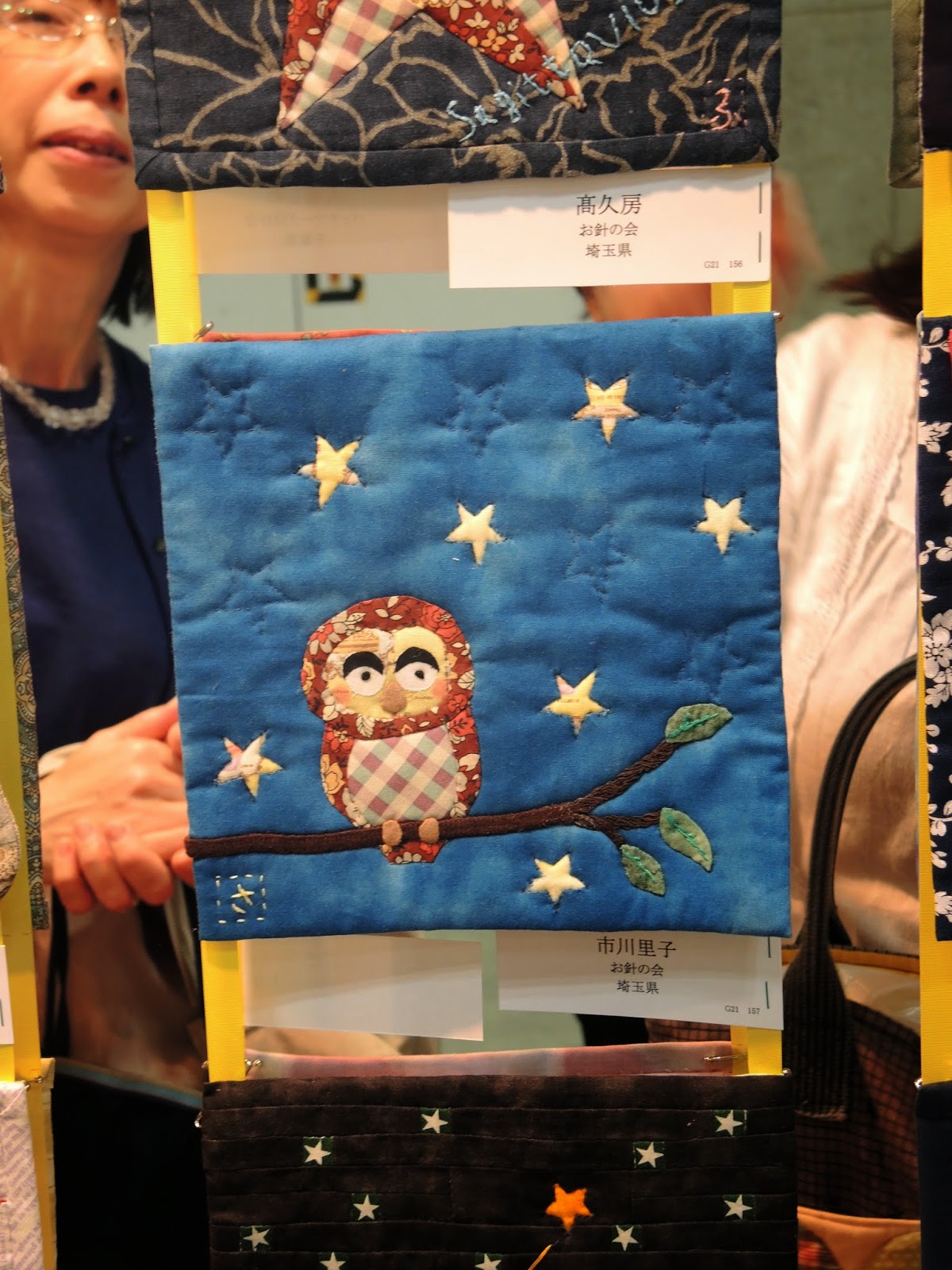 Here is a cute one.

I am fond of owls so took note. 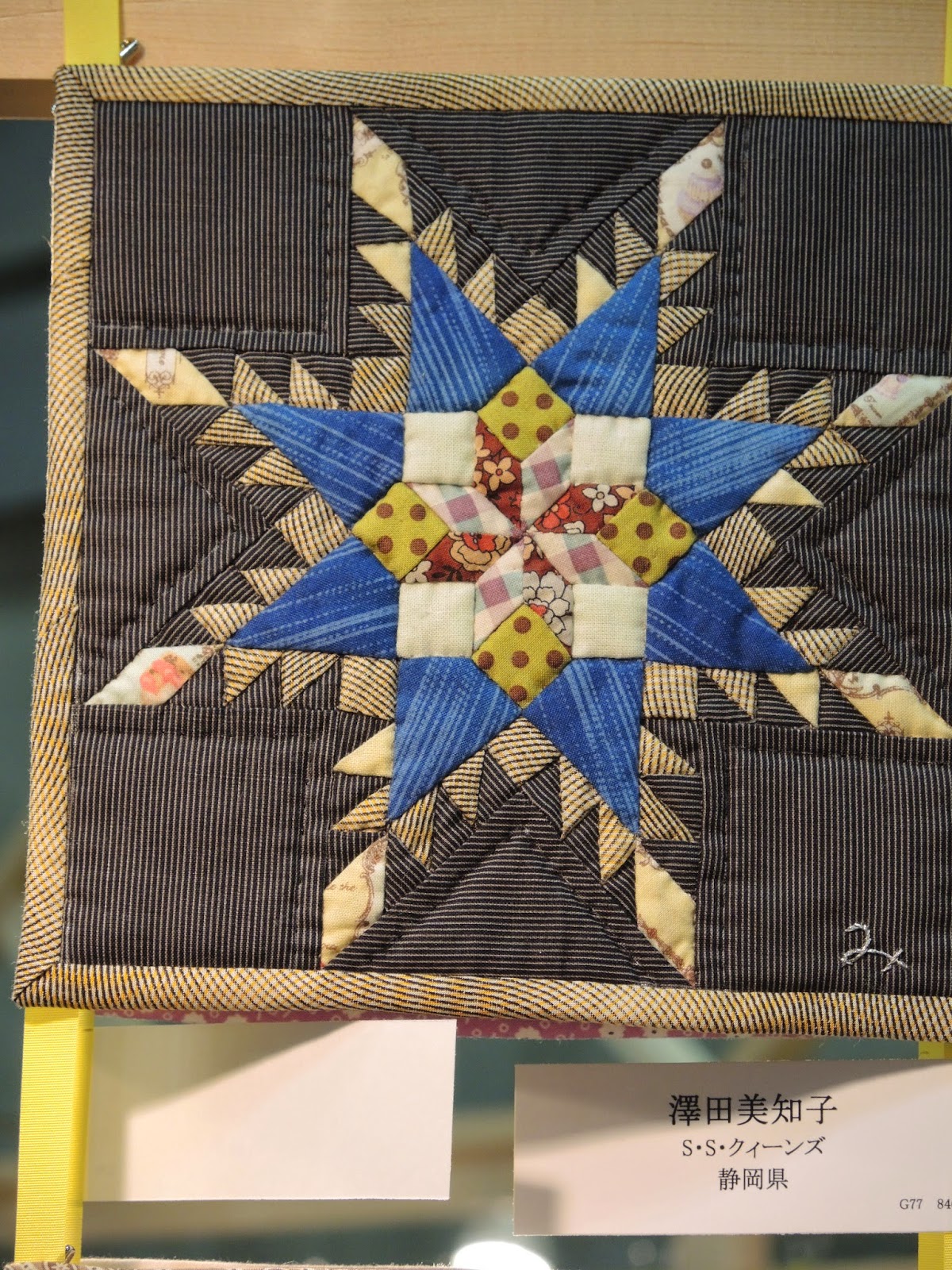 Considering the total size is only 20 cm., this is very lovely piecing on this little feathered star.


Challenge pieces are in the center star and star points. 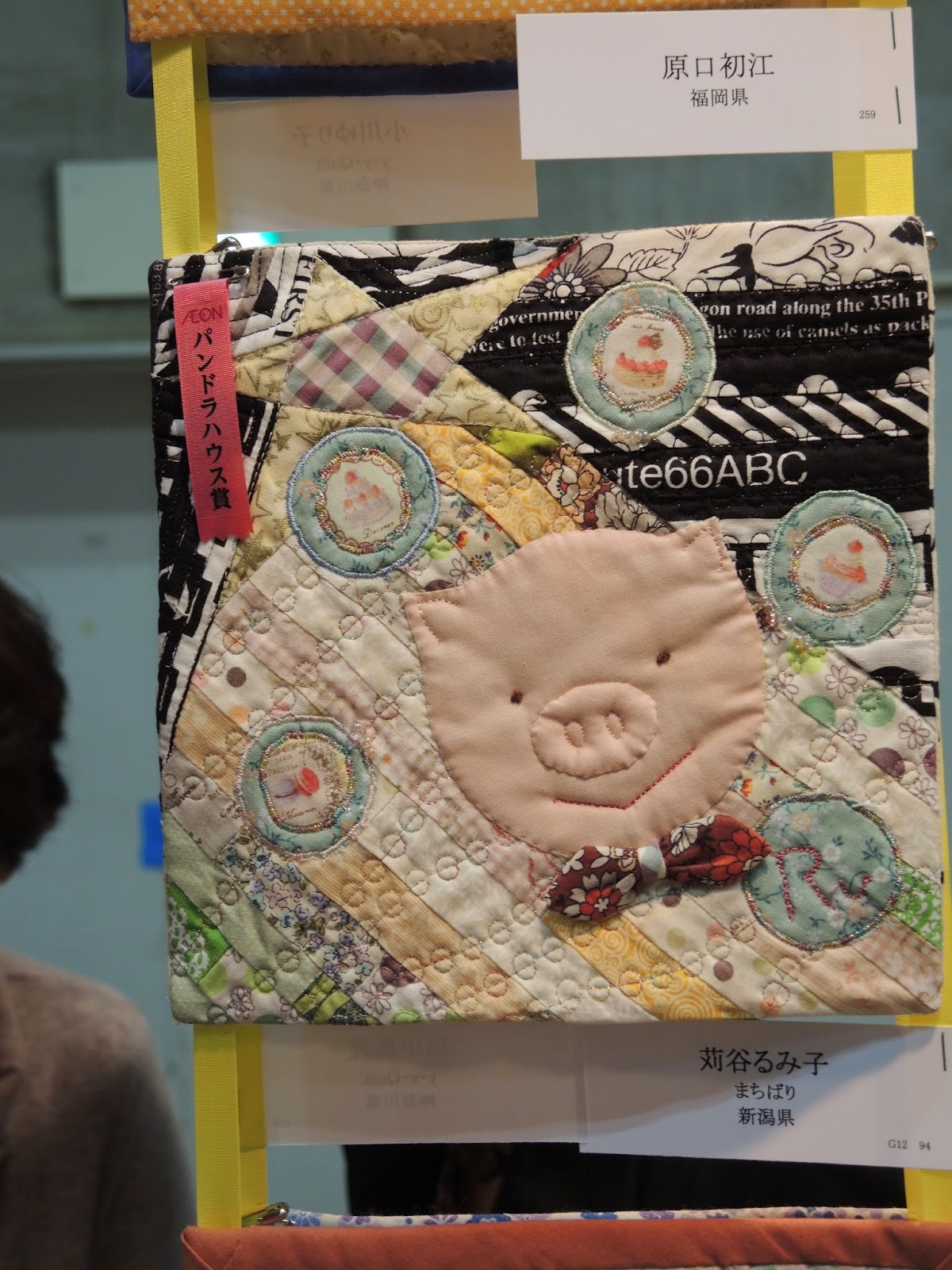 Here are a few with pink ribbons attached.

Can you find the star and the featured fabrics? 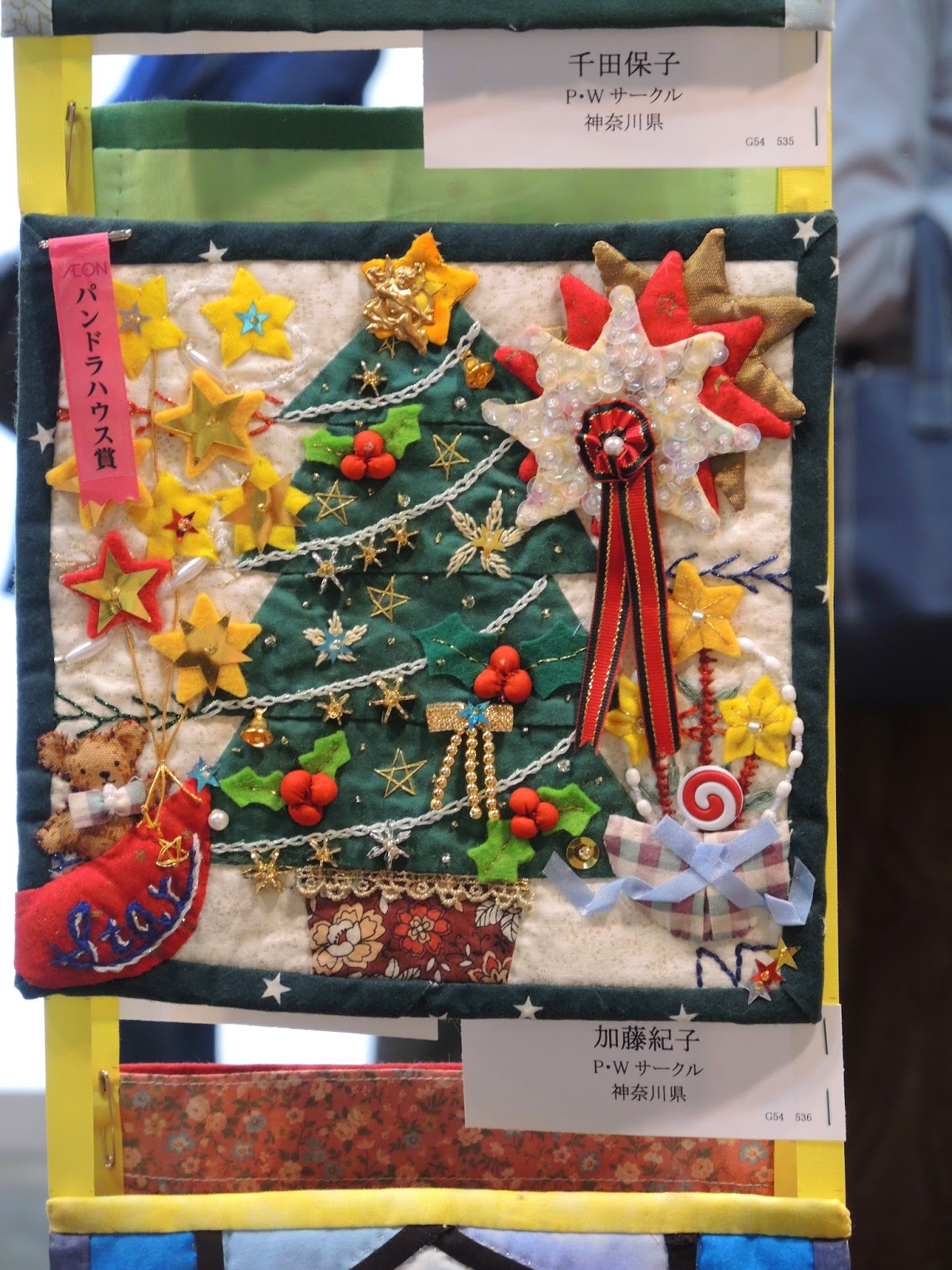 We were both running around this place with our cameras.


It was fun to examine the many entries and hunt the stars and fabrics... Kind of like an adult game of "I Spy"!

I think I recall a similar challenge last year so it must have become a regular feature of this show and has picked upin popularity.

Well, I am having some issues with blogger and will make another post if this one goes through.
... maybe tomorrow if time allows.
Posted by Julie Fukuda at 1:07 AM