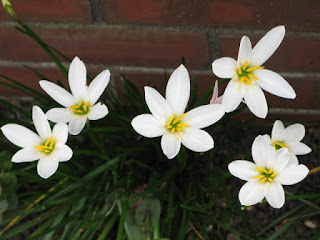 Little by little I am getting things back to my old-fashioned normal.

My recent goal being to sort out the picture problem.

Ta da! How is this for a picture?
I don't know what these flowers are. They bloom along the wall in the spring and again in the late summer.

They seem to have been happy that the rain brought a bit cooler weather. 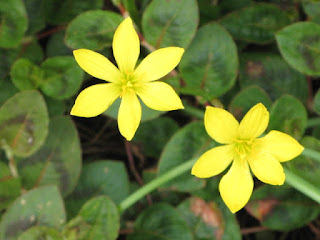 There is a yellow version too ...

And I think, in the past, there were some lavender ones as well.

Thursday I met up with a few members of my new quilt group and went to a wonderful quilt show at Seibu Department Store in Ikebukuro.

Of course, no pictures were allowed but there were attendants with gloves who would turn a quilt so the reverse side could be seen and lots of good close-up viewing.

The show lasted 8 days and included work by many well-known Japanese quilters and their disciples. Most were large quilts. Some were group quilts and there were some small items and framed smaller quilts. There was also a section of the show that seemed to be a collection of vintage quilts. There was no information in English, but even so, it was a very well attended and enjoyable show.

There were many booths of items for sale in the area outside the show. After a little lunch and chat with the friends, I went back to look over the shops. Some of them were connected to well known quilters and I could enjoy a bit of a chat with those I see from show to show. I saw a number of lovely packs of coordinated fabrics, but I was able to resist buying anything. After all, I will have to live to at least 200 to use up what I have. 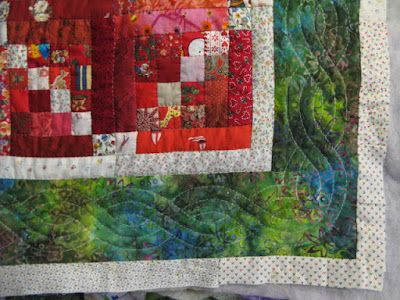 I added a narrow outer border and have finished quilting a bit over three of the borders on the rainbow quilt.

Using my template and starting in the center of one side, I was able to make all the corners come together in a neat arrangement.


All the main part of the quilt is quilted in the ditch so I think the large cable is a good balance.

I haven't made the binding yet but am thinking of a medium purple that will fit the backing as well.  There is still a few day's worth of work until I get to that part so plenty of time to think it over.

There was sad news that the Yokohama quilt show will not take place. It seems "Quilts Tsushin", a wonderful quilt magazine, has gone out of business ... and I think they were the sponsor. The show was held at a large conference center and though it was labeled "Quilt Week" , it usually was only three or four days. I think vendors don't start turning a profit until the 4th day so that may have been a problem. Even the Tokyo Dome show was cut shorter ... I heard because of a sporting event. After all, it is really a baseball stadium. The over-seas vendors were having second thoughts on that one too.
Gossip has it that tourist companies that had booked a tour from Australia to include the show in Yokohama are now scrambling to find activities to fill their agenda. I can't imagine what effect this will have on the Dome show. A few years ago, another quilt show that regularly was held at Shibuya, also was discontinued. Certainly there is no shortage of quilts waiting to be displayed.

One more x-ray tomorrow and I am hoping to say goodbye to tape and bandages and have a lovely long-awaited soak ... and I don't mean in the rain either.
Posted by Julie Fukuda at 4:59 AM