Oh, but it is HOT here in Tokyo! 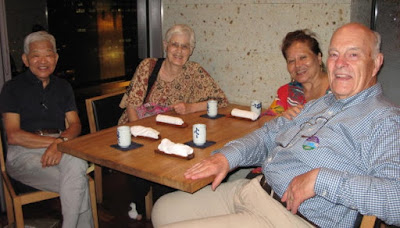 Within the past week, 11,672 people were taken to the hospital with heat prostration.
That is up from 7,743 people the week before.
Of those, 25 have died and 312 are in serious condition requiring at least three weeks hospital stay.
Of those affected, 5,689 are age 65 or above and Tokyo had the largest number of all the prefectures with 1,095.

This morning, Nikko and I walked behind a woman carrying an umbrella for shade and wearing gloves that covered her entire arms to above the elbows. I am wearing shorts and a sleeveless t-shirt and carrying a towel to keep the perspiration from dripping onto my glasses. Though the temperatures are in the mid-30s, that is the average and the neighboring area next to us is much hotter.

Tuesday we escaped to the city, where we met one of my "old" scouting buddies. (actually, I was the oldest one there) We have been friends since the early 80's when he was in Japan with the navy. He and his lovely wife helped us celebrate our anniversary with a delicious meal and fried ice cream, while we caught up on several year's time and gossiped about our mutual scouting friends. 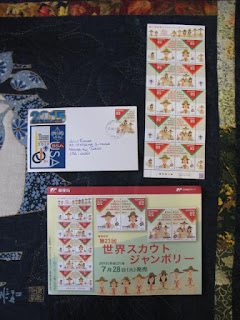 My friend had made a trip to the World Jamboree.

I had been half hoping to go ... I had attended the Japanese Jamboree at the same location two years before and, looking back to that week without shade and flooded campsites ... though I would have liked the experience, the lack of information about what might be different (other than thousands more people) along with the price in yen, gave me cause to reconsider.

Well, I got the first-hand report from my friend.

The next day, I also got a first-day-cover ... a real neat gift if you are a stamp collector. (my husband went over to our post office and brought back a sheet of stamps) These will go into my album of scout stamps from around the world. My friend and my husband both know how to make me happy. 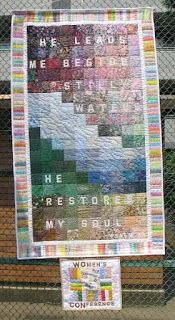 This past week I have been working on an extension to the Women's Conference banner.

The end of this month, the church will have what they call a "Rally Day".

After the service, different ministries of the church have displays showing what activities are available.

In the old days, this was a good opportunity to get people involved in the activities of the church and show new members what goes on during  the year.  The last two years it has become just a day to walk around and have a look.

That day I have a scout event to attend so I added a pocket to the banner that can hold the printed brochures for those who want to know more. 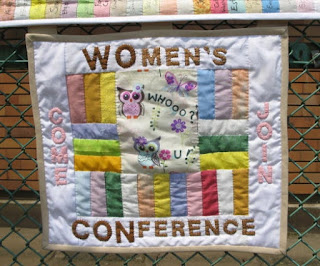 I am not a fan of acronyms and this event has become WOCON.

For that reason I put those letters larger and darker fabric.

The owl fabric is the pocket.

The colored piano-key blocks are for attendees to sign their names so I added a few more around the pocket. 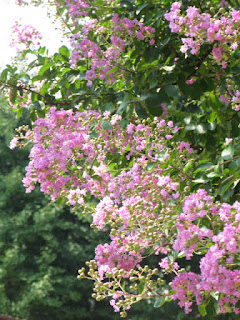 The park (where I borrow the fence for picture taking) was very hot in the morning sun but the Saru-suberi tree was bursting with blooms.

In Japanese this tree is called monkey-slip tree because of the very smooth bark.

Crape Myrtle is a tree I wish we saw more of in the city.
It comes in such a variety of colors and blooms throughout the summer and into the fall.
The tree takes in the pollutants which are flaked off in the bark. It can also be pruned way back to the main branches during the winter and yet come back with lots of shade and blooms in the next summer. I suppose it drops a lot of petals and flowers but both Linden and Zelkova drop sticky stuff and they are used for street trees anyway. 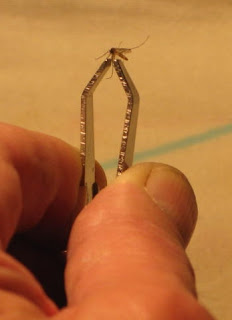 And one more piece of trivia ...

Sunday night ... or early Monday morning we had a "Blue Moon". Well, in Tokyo it really was rather orange and I thought I might take a picture of it dangling between the power lines outside my greenhouse windows.

For that, I needed to open the window.

Well, the camera was not keen on being awakened in the middle of the night and got confused about what I was focusing on.  I gave up.

BUT ... the mosquitoes didn't mind being awakened and took advantage of the open window,  I took a picture to show how tiny these critters are ... especially if you are used to those blood-sucking helicopters they have in Minnesota.

If they bite and you refrain from scratching, they do not itch for long. BUT, they never seem to bite me (like the nurse, they can't seem to find any blood), they just fly around singing in my ears and driving me nuts.  This one wouldn't sit down so I could swat it so I had to turn on the lights and pick it out of the air.
We do have bigger mosquitoes in the city and one park was closed part of last summer because those "Tiger Mosquitoes carry Dengue fever. These tiny ones are more common and can breed in the smallest amount of standing water.

I am still sitting with my foot up. The blocks on Ben's quilt are almost all quilted and by tomorrow I will think about how I want to do the border.  And while I am wiping my sweaty brow, I am thinking of my son, Ken, fighting fires in Washington State ... Maybe I don't really know what HOT is ... and I don't want to find out. Stay safe, big boy!