It's in the hoop! 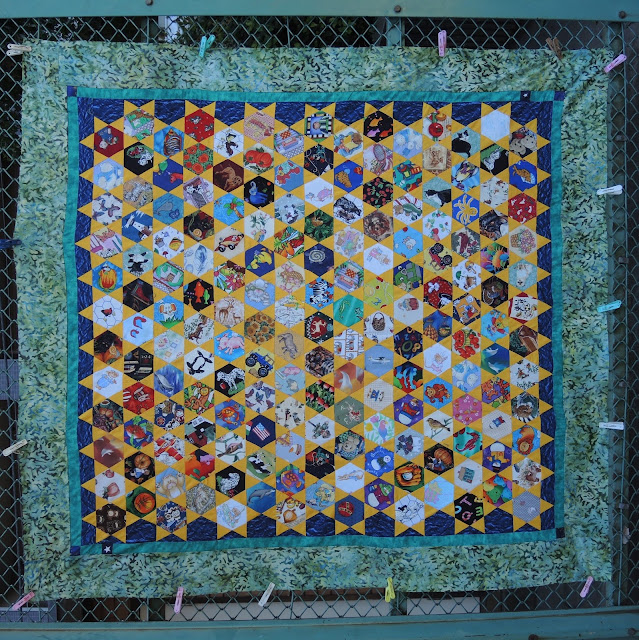 No internet connection for nearly a week means more quilting.

The lighting wasn't very good on the fence when I went out to get a picture, but this is what the I-Spy quilt is looking like ... only much brighter.

Last Friday I had my Cub Scout meeting followed by a trip to camp for an "OA" weekend. OA is Order of the Arrow and it was my duty to do the "Brotherhood walk" (The last step for those completing the level of Brotherhood after being an "Ordeal member for almost a year)

I take the candidates through a back trail that is never used and most know nothing about, and deliver them to the area of the ceremonial fire. Luckily, I checked out the trail earlier in the day because a large tree had fallen across the trail. It was way too large to be moved so I returned to the quartermaster in the main area to pick up a saw and some shears and hiked back out to clear the trail enough to crawl under the tree.

Since I had to attend an early choir practice on Sunday, I returned home late Saturday night. There was still no internet connection. In fact, the neighbor, whose internet I borrow, seems to have been away all week ... so no connection.

I was out Monday for school and Tuesday for another scheduled activity, but there was still no connection whenever I checked. Just as I was about to take the dog on her evening trip and go to bed, I heard the neighbor's door shut so I opened my laptop to see if  the service had returned with him. Sure enough, weak but there. Now it is well past my bedtime and, though I wish I could check out all the blog-hopping I have missed, I really need to hit the sack.
Hopefully there will still be connections tomorrow ... well, actually it IS tomorrow right now!

The internet company will come on Friday to restore my telephone line. Though they claimed I could not have my former phone number back, my son-in-law had negotiated with them to restore it. We shall see .... As to the internet, it will take until the middle of June to get that back. I honestly can't see why they could turn off the connections because they were in my husband's name and couldn't just switch names instead of starting all over from scratch. After all, the cable and modem are still in place. For a country where service is always so quick and accommodating, this is certainly not what anyone would expect.

So ... the quilt is moving through the hoop. Quilting in the ditch is about all that is needed and I will use a wave pattern for the outer border. From Friday evening I will be back at camp for a Cub Camp where I am in charge of the nature walk.  ... and I have promised my Pack I will bring my box oven so we can bake a cake for dessert Saturday evening. No internet on weekends anyway ....
Posted by Julie Fukuda at 9:26 AM