Progress on the door 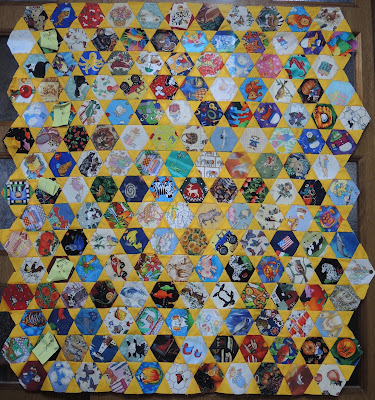 Well, the I-Spy quilt is slowly moving along.

Yesterday I sewed the five rows together.

Now I have to resolve the odd edges.
They will all end with stars so that means I will 60+ little triangles to draw on to the yellow fabric and cut out.

Then I will have to decide on what to use for the borders. At this point the size is about 40" x 42".

I think it will be about 44" square by the time I get the inner edge done, then a small sashing and a wider border ... not yet selected from my stash.

I have about 48 hexagons left from those I started with so I could add more, though most of those are fabrics I have already used ... some more than once as you might be able to see. I had been trying to keep a reasonable balance of color and repeats. 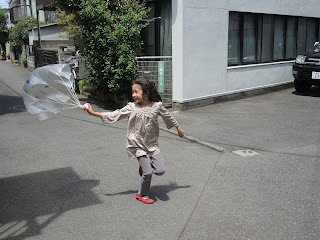 Norie and Leia came on Friday night and we had an early mother's day on Saturday.

Leia found a pattern for a parachute in one of my craft books and we hunted up the various components to make it.

She sewed a little drawstring bag of fabric and stuffed it with beans and wadding, decorated a cut plastic bag with markers, and fixed carefully measured and cut string to each point.

We took it outside to try out. Tossed it from the neighboring walk-up, the top of the slide in the park, rescued it from tree branches, and... 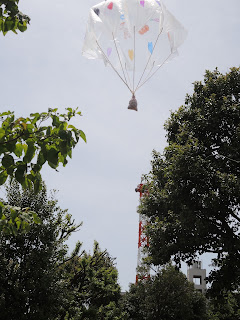 ... Just as Leia was running to catch it at about knee high off the ground, it began to rise.

First we were afraid it would be caught in the tree but it cleared the tree tops and kept climbing and moving to the northwest.

Just as it neared an apartment building across the street, it rose higher and sailed above the buildings.

We dashed to the back street but it had not come down anywhere we could see ... and in fact, though I have kept my eyes open, it has not appeared in any of the trees or balconies in the direction it took off in.

We did make another one ... that one too rescued from a tree by Leia who shinnied right up to the top while I held my breath and wondered if I would be able to catch her should she fall...
For good measure, I suggested she fold it up and take it home and find a larger space to play with it.
Keep looking up ... you may see that first one on it's continuing adventure.
Posted by Julie Fukuda at 8:33 PM