on to the next step. 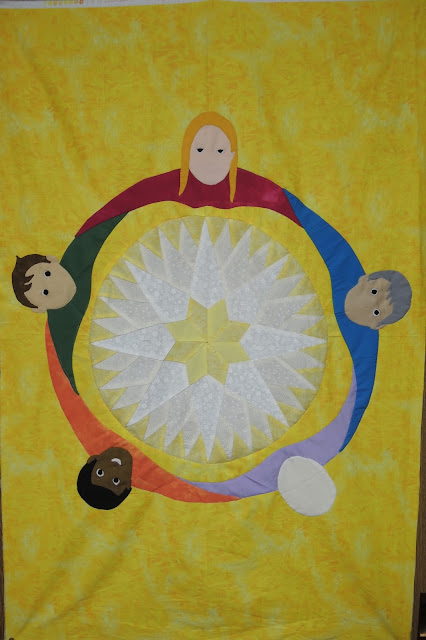 The applique is done and maybe tomorrow I will begin embroidering the details.


I can't say I am particularly fond of these characters representing members of the church.

I'm not sure what the blank one is doing but maybe the idea is to insert oneself into the circle.

Should I put a question mark there or some kind of an arrow???

The plan I was given had "Shine Together" written across the center and the various ministries listed on the outer edge.

I will put the words above and below and wondering if I should use proper alphabet or do something rather large and wonky.

I thought it might be interesting to outline the letters and then fill them in with large stitches going randomly back and forth. Then again, that may turn out to be rather time consuming

I am also thinking of adding a row of one-inch scraps in the fabrics used, at the top and bottom to make the size right and frame the hanging.

At this point my inclination is to finish it as simply as possible and quilt it with rays of the sun coming out from the middle to the border. Since someone else came up with the design, I have tried to stick to that plan as much as possible. 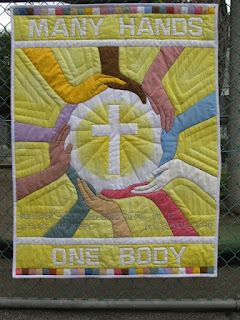 That was my own design and is often hung in the entryway.

I am afraid they are going to look too much alike ... though I have to admit I like the hands better than those characters.

This one will have dark lettering and the yellow is brighter than this one that I tie-dyed.
If I had better computer skills, I could take the picture and play around with in until I found something I liked.

But, then again, I'm not all that sure I will like the results regardless.

Only two more days of VBS to go. Tomorrow's game is going to be a quieter memory game. (at least, I hope it will be quieter. Two of the five groups are really wild) I'm glad they liked the games so far but they come with no "off" button. Once they get going, the biggest job is to keep it safe and get them to stop at the end.

The news is full of commentary about the Emperor wishing to quit his job. He is only a few years older than I am and though I do not have major health problems, I am happy to have jobs to do.
At least he doesn't have to ride the mobile sardine can to get places. I am wondering if he will get any sympathy because of being "old". Certainly, though each train car has eight priority seats at each end, the only people in those seats are young ... teens ... 20s... maybe a few in their 30s. Today it was so crowded that I kept getting pushed as the train moved and the young girl next to me kept shoving me back every time my bag touched her side. Finally, with three stops left, I was able to grab a seat but then an old guy got on and of course no one stood up so I gave him my seat. The young riders were just busy sleeping or playing video games or texting . I doubt if the emperor got on, they would even notice. At least he can travel by car and doesn't even have to do the driving.
I think it will be a shock to all those entitled youth that some day they will also get old.

OK, enough complaining! I will now reward my progress with a few stitches in my nine-patch.