The banner is done 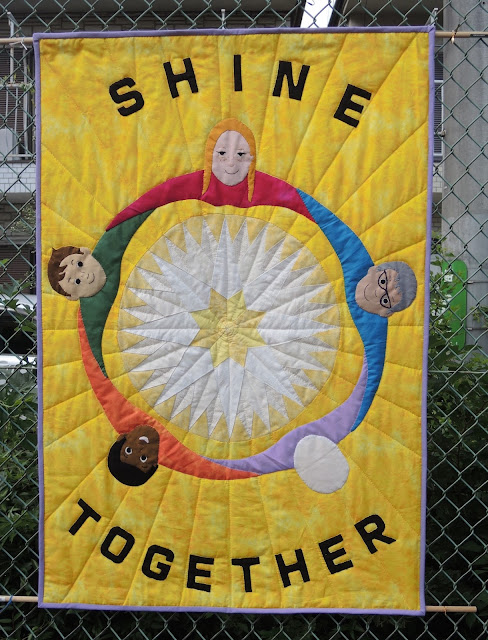 Last night I finished turning the binding.  Looking at other banners over the years, I had made too many with white and blue so I decided to go with lavender. I think it shows off the blank person where we should view ourselves.

Today I added the sleeves and found that I had purchased extra dowels some time before. Great! I won't have to go shopping in the heat of day. The last part will be to saw off the extra length of dowel and add eye screws to the one on top. I figure ten minutes at the most including clean-up time.

Rally Day is a week from next Sunday so the deadline has been met with time to spare.

Next ... Here is a blogging issue that challenges my patience.

A while back when Google added Google plus to the blog, things began to happen that I neither like or understand. I am not now or ever will be a computer guru. I often get help from fellow bloggers and when that doesn't work, cry on the shoulder of my guru son.

The first thing that happened was that suddenly I came off as a no-reply blogger. I noticed that the same happened to many of my fellow blogging friends. It was not a huge problem because I had contacts for them. It only has consequences when I want to reply to comments of those whose e-mail address I do not know.
Friends sent links for advice on how to fix it but the site pictures telling where to click did not match my screen. Finally, I gave in and went to Google plus. (magically fixed) At that time I began to notice that many of the no-reply were non-google addresses. Maybe a coincidence?

Well, the next problem soon arrived. Every comment I sent off came back to my in-box saying Delivery failure as they could not accept my yahoo address. I did go back to check and indeed, the comments had gone through. Some of my blogging friends did tell me that the comment had come but not to their in-box. Looking this over again, I noticed there was a direct relationship to my yahoo e-mail address.

Well, my son looked at this a number of times and since I have a g-mail address too (juliefukudasenior@gmail.com) which was set up for our family blog to avoid confusion with my daughter who shares the name. I really didn't want to give in and change my e-mail address but my son gave that a try. Magic? Suddenly, the delivery failure notices stopped coming.

BUT ... now, my blogging friends are getting a message saying their comments had delivery failure because my in-box is full. That is also a bunch of baloney because when I went to check the comment section of that post, all the messages were there ... and all had arrived in my in-box.

I don't like to make judgements but it does look to me like Mr. Google is trying to undo his competition in a nasty way. All the comments who got those messages were non-google addresses.
At first it seemed a war between yahoo and google but now it seems to be attacking other correspondence addresses.
Some of my blogging friends have switched from blogger to other sites such as word press. It might make a bit of confusion for followers but I don't know how these things work.

I am wondering if I am the only one with these problems and it is something I am doing wrong.
I know change happens ... whether we want it or not ... but why keep fixing things that ain't broke?
I might even have more time for quilting without these frustrations!
Posted by Julie Fukuda at 11:46 PM