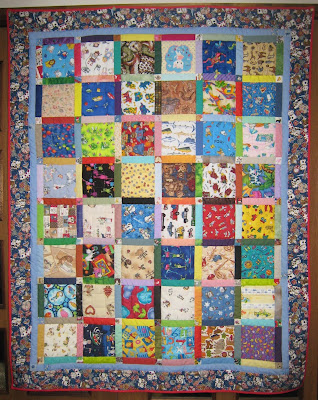 Wednesday the birth of a baby girl was announced with a darling picture on Facebook.

She was in the arms of her smiling father, Pastor Ivan.

At that time I was still quilting a cable into the border of the I-Spy quilt.

With Thursday and Friday relatively free, I determined to finish the quilting and put on the binding.
On Thursday evening, on my way to choir practice, I stopped off at a small sewing shop the next station up the line to buy some bias tape.

I need to get wide bias because I sew it on double and then turn it to the back. This leaves the bias rounded rather than flat and I expect it to wear better than single bias sewed flat.

I had planned to buy a light blue but none of the blues went well with the blue in the border so I decided on a dark red that matched both the red in the border print and the red sneakers on the backing. 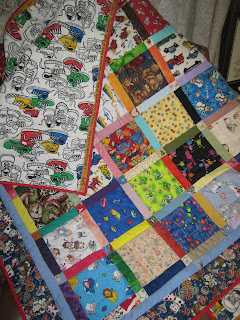 I tried to arrange the blocks so there would be no definite up or down, but the sneaker print is directional. It was also a bit narrower than the top so I added a gold strip. Along the edge I used a permanent marker I had bought for the choir to use to sign the last baby quilt.... writing, "I SPY... a dancing cat in a pink tutu, a racing car with wheels  of blue, count the cats or bears or frogs, butterflies or barking dogs, and as you look , here is my wish, find some love in every stitch. April 2017 name, and Tokyo Japan.

Tomorrow I will write a note to the family and a little guide as to how to play I SPY, and other games that can be played such as an alphabet hunt or counting games.

So many gifts given to babies are outgrown sooner or later but I have read that one of the best gifts one can give a child is the gift of words. Those words can last a lifetime and the two "big" brothers are in the best place to give those words. I hope they will have fun in the process.

Last Sunday afternoon, Norie and I went home with Paul's best friend, Wally. Sakura Shinmachi, where he is living, was having a cherry blossom festival. The street was blocked off with a stage set up and some idol performing to huge crowds. Walking along the street through the packed walkways with everyone (except us three) trying to get a good view of the performers, was a challenge. 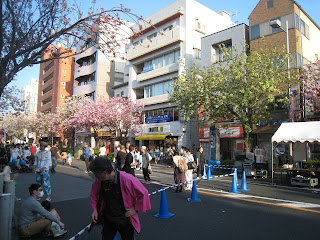 The barriers were being moved as our visit ended and I wanted to take a look at one of the cherry trees that had green flowers.

Usually one street will have all the same kind of tree but this street had quite a variety of different cherries. Some were almost finished blooming and dropping petals but others were in full bloom.

I don't recall ever having seen a green-flowered tree. 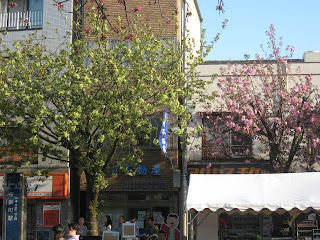 This was a pretty good sized tree.

Often, in some city places, trees are labeled with their Japanese common names but one hardly ever sees the Latin names, even in the nature park.

My father always referred to trees by their Latin names and I have found that very useful as one can see how various trees are related to those back in the States or other parts of the world.

I have gone through many of my Japanese tree books and written in notes as to Latin names and related trees. In fact, in 1990 to 1991 I wrote and illustrated a book on plant identification  of local plants in English, for Scouts to use for rank advancement ... as a two-year project for a PHD in Commissioner Science . I dedicated that book to " the two Pauls in my life: my father Paul Jerabek, who supplied and nurtured the seed, and my husband Paul Fukuda, who helped with the reaping and harvest." In those days, we only had word processors and not only did my husband help translating information, but also arranging the pages. That book was put into a computer file as a project of another scouter so that if I wish I can add more  and edit the maps as times change. 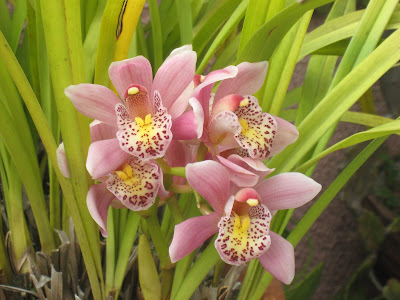 With a day of sun yesterday, I dragged my bedding out to the third floor "balcony" (railing outside the windows) for some airing.

On each corner of the area I have a pot of cymbidium orchids, and I found this one in bloom.

The leaves are a bit ragged having spent the winter out in the cold and rain, but the flowers are lovely.

The "Easter" cactus sitting on top of the air conditioning unit beside the orchid has just begun to show the start of tiny red flower buds.

I also noticed many of the others in the cacti collection are developing buds. Hopefully they don't all wait until the week I am away at Scout camp like they often do.
The sun was out part of today too and I am down to only a T-shirt and one warm layer. Quite a change from a few days ago!
Posted by Julie Fukuda at 4:02 AM