Spring break is over and spring is yet to arrive 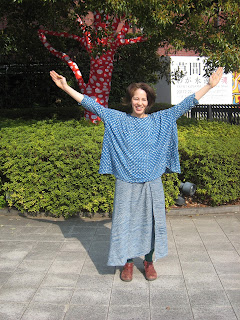 Thursday I met with Norie and a friend to see an exhibit of the works of Yayoi Kusama in the big museum in Roppongi.

The ticket line was long and wound up and back the street lined with trees wrapped in polka dots.
Norie came dotted to fit right into the display.


The lines for tickets and entry and viewing were very long.
It is rather nice that so many people are interested in seeing the works of an old lady artist. (but it was one huge line after another and all moved at a snail's pace).

Cell cameras were allowed in the large hall and I took quite a few pictures but am not able to send them to my computer.
(the problem with having  smart phone that is smarter than I  ... and a Google android that doesn't like Mr. Yahoo)

Most of the work was done in acrylics on large panels and there were some pieces that looked like they would make fine mola art. 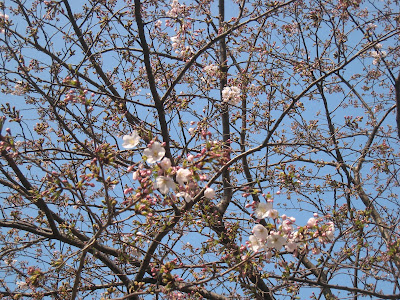 On the train returning home, there was an announcement poster about the Sakura Matsuri this week in Toshimaen.

Norie and I decided to take the exit past the Park gates to see if there were any cherry trees in bloom for the festival.

Well, yes, there were lots of flowers in bud but hardly any were opened.

This morning when Nikko and I went past the park near our house, we were able to count 5 flowers on that big tree that were actually blooming. That is four more than we saw on Thursday. On Saturday morning there was only one... But then, we have had a string of cold and rainy days.
I wonder if the park will extend their viewing once the trees are really in bloom.

On Friday my old quilt group met. One member felt sick on the way and called she was returning home. I met up with the other three and we began to walk to our gathering place. The area has been changed so much that after 45 minutes of hunting, we had to call our hostess for a rescue. Every one of the landmarks we used to rely on was gone!

To be safe at the end, we decided to take a taxi back to the station ... and it was a good plan because the rain had begun again.

Over the long week doing not much outside, I was able to make progress on another I-Spy quilt. 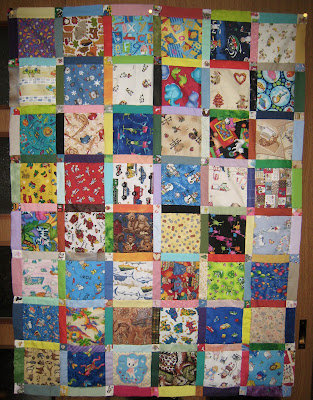 Today I have added a one-inch blue border around the edge and if I have time, will cut a piece of Japanese print that is left from a recent border on my scout leader's alphabet baby quilt.

I am planning to give this one to the two first sons of the pastor who is expecting the new baby at the end of this month.
The idea is that they teach the new baby words, making a game of the quilt. If it lives on a sofa it can be tossed over any sleeping child. The way people come and go, the baby will never remember me anyhow and something the family can share just seems like a better idea.

Once the border is on, I will quilt in the ditch and add some light quilting in each five-inch square.

I work slowly enough I can figure this out as I go. 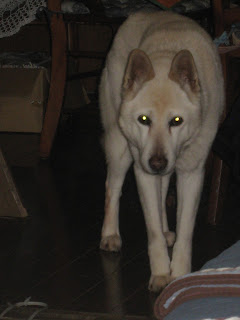 Now, there is a member of the family lurking in the doorway.

This dog is good at reading body-language.

She knows that when my coffee is gone, she will get her nightly outing.


She can tell by the tilt of my coffee cup when the last drop has been consumed. At that point she begins her pep-talk.

On the other hand, I am not overly eager to bundle up and go out in the cold. Of course tomorrow is an early rise for rice delivery, then school .... then, hopefully, the dentist because my front tooth came un-glued and I will have to go out in public with a gap in my smile ... or maybe give up smiling... or should I get one of those masks ...
Ah well, hopefully next time there is a holiday, it will go a bit better.
Posted by Julie Fukuda at 4:13 AM