Where did the week go???


Quilting moves along slowly in the ditch. The I-Spy quilting is now at the inner border. I am now looking at those five-inch prints and thinking a inner square, an inch and a half inside might do the job. Thinsulate is such a good batting and will not shift over time and doesn't need lots of quilting.

I buy thinsulate on a bolt, so I have one of 40-weight, one of 60, and another of 80. For this little quilt I am using 60 weight. I think it is suitable for summer or winter in a home that has central heat. My vision is a quilt for the sofa that can be used in play or tossed over a napping child. 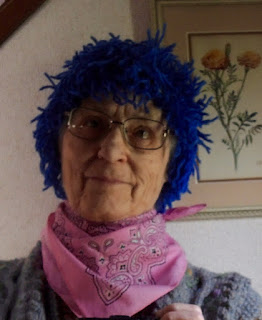 The week has been filled with activities as always but with plenty of extras tossed in.
The cookie factory with Leia filled up Saturday and both Nikko and I ware so tired we both over-slept Sunday morning and I missed the first service on Sunday, causing worry among the choir members.

Monday the usual early rise for onigiri delivery, then to school. There was much preparation going on for the school's "Spring Show" and with the art teacher out sick, a list of last-minute things that needed to be done.

I found out that for the teacher's "dance" performance, we needed to wear something pink. Well, pink being my least favorite color, I needed to do a little shopping. I was not going to spend even 1,000 yen on something I would never use so I looked through the 100-yen shop and found a light red bandanna.

Tuesday I found some bleach and soaked the bandanna in a mixture of bleach and water until it looked about light enough to read "pink". I had hoped to hang it in the sun but nothing but rain and more rain throughout the weekend and on into the week.

Well, when that was done, I sat down to open my laptop and  read another request ... that the teachers would bring a wig for the performance. Well, long ago I had made a Raggedy Ann yarn wig for some Halloween costume ... but, when I went to the costume box, I found it had either been thrown out as something nobody wanted or taken by one of the kids to add to their own box.

Luckily, I had been given some left-over yarn from a friend when his wife died. I found a ball of blue that looked as if something had been knitted and pulled out, but the ball looked to be mostly there.
I dug out a large crochet hook and made a mesh cap, then cut what was left into  just under four inch segments and tied them to the mesh. I was thinking if I didn't have enough, there was a bit of a green ball I might be able to add here and there. In the end, I decided what I had was good enough for a quick performance with me in the back row.

The show was Wednesday morning and some of those teachers were fantastic in their get-ups. I have had good reports on the show and I'm sure there are lots of videos floating around. The kids and teachers were so creative. The back-drops created over the school year were very pretty and held up well... worth the hours crawling around on my knees taping paper pieces together and reinforcing the painted sections. (to say nothing of washing splattered paint off of kids and tables and floors.

Thursday  evening, a service followed choir practice. (I think we may have had half a day of sun somewhere but off and on rain) Today is sun at the moment and tonight I have a cub scout pack meeting to run. Saturday English lessons, and a full day on Sunday with three services. Then another week will be in line. I am begging off a cub camp the next weekend. If I go I need to drive because I would have to take the dog and she cannot ride on the train. It would mean that in addition to the camp fee, I would have to pay gas and tolls while missing my teaching job ... and a late night return after the campfire so as to sing Sunday morning. All that in a muddy valley with only a few port-o-potties.
The kids will spend the day with shooting sports...  We had one of those events in the fall and one last year too. Long ago I taught archery in a summer camp but I can't say I really think kids need so much of these activities. Only a few of my pack is going and they don't plan to spend the night so a trained leader is not all that needed.

Well, back to the stitching.  I am nearing the end of the inner border and thinking of something simple for the three-inch outer border that won't detract from the print.
Posted by Julie Fukuda at 7:10 PM