The quilting has begun 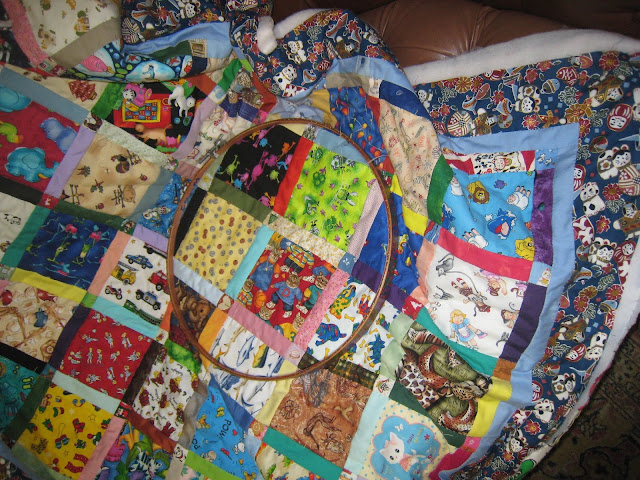 Finally, after a warm sunny day yesterday, the cherry trees are in bloom. The "street" (or is it a lane?) in front of my house is dotted with cherry petals blowing in the wind ... and the nearest tree is a block away!

It has not been the best of weeks as the root of my front tooth was cracked so it had to be pulled. The dentist made a partial denture to fill the gap but I am finding it almost impossible to eat anything other than oatmeal and other soft things that don't require chewing. Not too good for a nibbler like me. I sometimes think of that bully who shoved my face into the drinking fountain and killed the tooth so long ago. I wonder if she continues to bully people.

I think about the teachers who helped to make poor students the object of bullying. Did they ever know what they were doing? The math teacher who gave a timed test every Friday, then seated the students according to the test results every Monday morning ... Causing the class to laugh at the joke that I ... sitting in the last chair ... was the only student to never move. (because I could never finish the test in the given time, thus failed.)
I think of the Science teacher who, when my twin brother won the state science award, read all my grades to the class and asked how I could be so stupid when my twin was so smart. and ... the English teacher who assigned writing a poem ... the best assignment I had ever had because when I couldn't read, I memorized the words as others read and words that rhymed were easiest to remember. Well, when I brought in my assignment, the teacher walked around the room passing the homework back. She would stop now and then to read out one of the poems she liked. As she went on, I thought maybe she was saving my poem to last because it was much better than those she was reading ... BUT, when she got to me at the last, she did not read my poem. She ripped it up and threw it in the wastebasket saying it was too good and I couldn't possibly written it. That was the only time my mother ever spoke up for me, and then the teacher wanted a copy of the poem for the school literary magazine. Sadly, I had written it as I made it up and the only copy had gone to the trash. If there was any apology, it only went to my mother and in the eyes of the class I was not only too stupid but copied the work of others.
When I walked down the halls, kids walking past would hit the books out of my hands, flying around the hall floor. When I was at my locker, they would slam the door on me. In PE, I was always the last to be picked for a team (and the main bullies were the ones the teacher asked to form teams) Even walking in a line, those girls would step on the back of my shoes, making them come off.

Now I am a teacher. (And that is why ... because I just didn't want another kid to fail childhood 101).
I have developed nerves of steel and a teflon skin, which worked well when I first came to Japan as a weird foreigner. I have long ago forgiven the bullies but I am ever vigilant in school or in scouting to support behaviour  that encourages each child. We build on our successes, even if they are small steps.

Being rather depressed about the tooth situation, I have mostly stayed home and spent my time pulling weeds and working on the I-Spy quilt. I added a border of Japanese print which may remind the family of their time here in Tokyo ... and maybe learn a few Japanese words.
Then, yesterday afternoon, I basted the backing and thinsulate batting and top and began quilting in the ditch. I am enjoying the process and looking forward to the day it is ready to present to its new owners. The most recent quilt has been seen covering the darling baby girl who returned from the hospital The father claimed it to be a magic quilt because the baby sleeps quietly under it. I take no credit for doing magic but am happy it is being used and enjoyed.
Posted by Julie Fukuda at 8:19 PM