Well, if there is some progress, it is not on the Mola. 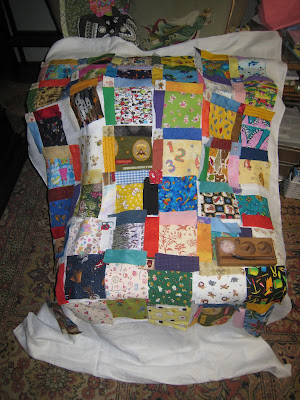 It is hard to work on a Mola while riding a train or sitting in a meeting.
It takes more concentration than in those places.

Meanwhile, there are babies coming at full speed and I have a number of cut pieces I can assemble for an I-spy quilt.

This one is for a boy due in February so I started with my tin of four-inch blocks. That means a lot more work because more blocks are needed to make a decent size quilt.

Also, at a certain point ... which is now ... I have to lay out the blocks and do some planning as to which blocks to put side-by-side and what color of sashing gives a better balance.
I wish I had a better space to lay this out flat. Well, there is the floor, but that is covered with dog hair. Then there is a bed in the second floor loft ... but that would mean a lot of climbing up and down the ladder to get more fabrics, carrying them up to try and in the end, back down to put away.

This baby will get a scout block as he has two scout brothers already and parents that are involved.
Putting the sashing on the blocks and joining the blocks once they have been decided can be done on the train. Rain is expected for today so hopefully I can get this little project organized before another busy weekend arrives. 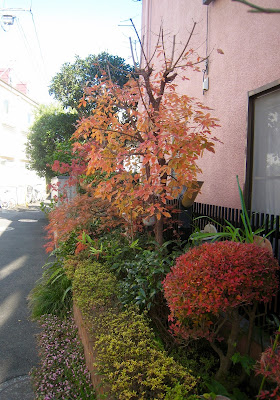 Our pink house has plenty of competition.

This year the Enkianthus was trimmed and makes a big ball of red behind the azalea hedge.

Behind are the three Maples, a tall Vine-leaafed shagbark maple, then the lacy cut-leaf maple, followed by a Japanese maple in a large pot that came from a friend's balcony  when she had to move.

The sweet daphne have set their buds for spring so the promise for next year is in the bud as these leaves are swept away.

Along the way to the park with Nikko or to the train station I can enjoy bright persimmons hanging on their bare branches and winter oranges among their dark leaves. Against bright blue skies, this is a lovely season.

Our final rehearsal for "Choir Sunday" is tonight.
Wally and I have been assigned the lighting of the first Advent candle. As fall leaves fall, Advent appears and the dys move along... Time to stop playing with the computer and get things moving too.
Posted by Julie Fukuda at 5:51 PM