Three seems to be an auspicious number in Japan.

The third of November, Is "Culture day". Children of three, five, and seven are dressed in fine Japanese clothing and taken to the shrine for a special blessing ... and usually a photograph of the occasion.

Shochikubal, The three plants, (Pine, Bamboo, and Plum) The first two stay green throughout the winter and plum is the first to flower in the late winter. They are often combined in flower arrangements and used in New Year's decorations, standing for hope and good fortune.

Then, there are those three monkeys ... see no evil. hear no evil. and speak no evil.

Well then, it took three weeks in three different locations to finally get my new senior driver's license.
Might I say, "The third time is a charm"?
Today, as I passed through the train station, the man at the ticket window wished me well. When I got off at the city hall in Shinjuku, I didn't know which building to head for so I asked a man that seemed to be looking for something too. He replied he was going to the same place so let's find it together.

The first building we entered was full pf police and people in fancy black suits. It looked like the way was blocked but my "guide" politely told the guards he was taking me to the driver's license place. The guard said, "follow me", so we set off through the building with other police saluting him as we went. At the top of an escalator, he sent us off, giving my guide directions as to the route to take.

We found the place and compared with three years ago it was working very efficiently. There were lots of people but I had very little waiting while moving from window to window to window. Heading to the last window, I met up with my "guide" who gave me a high five as I thanked him again.

The reverse route had to be changed as the first building was still not allowing entry. I wonder what was going on in that place. Still, I was able to locate the train station as it is much better marked on signs... and when I came out of the ticket gate at Toshimaen, the man in the window greeted me home with another high five.

So, that is one more thing off my list for the next three years. 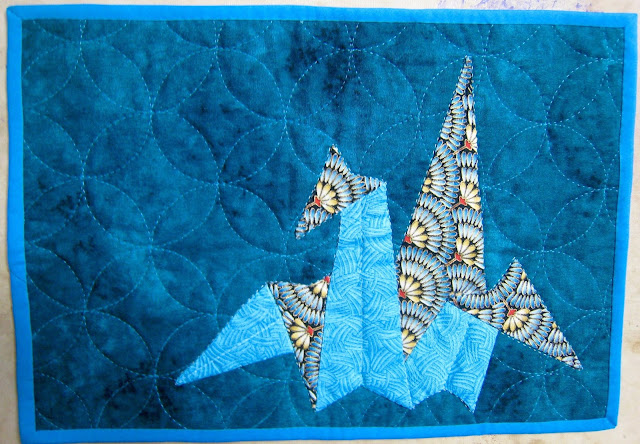 The next thing off my list is the mug-rug for Wally.  DONE! When I skyped with my two daughters in Oregon, they suggested I make him a napkin and whittle him a napkin ring. Hmm... Tomorrow is Thanksgiving and Friday is my quilt group.How much more time can I whack out of what's left of this week?

I will not need a turkey dinner or pumpkin pie to be grateful. Even in the most trying times, family and friends and even strangers have brought me love and comfort and aid. Blessings abound.
Posted by Julie Fukuda at 3:45 AM