Sometimes, three is not such a lucky number. 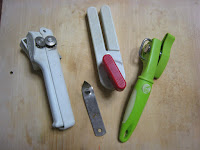 Thanksgiving day ... the sun had finally moved in to replace the rain, and Norie was on the way to help with dinner preparations.

I had found a can of pumpkin in my cupboard and there were two eggs left in my fridge. That would be enough to make an 8-inch pumpkin pie.

The crust was waiting in the pie pan when Norie arrived and joined me in the kitchen. 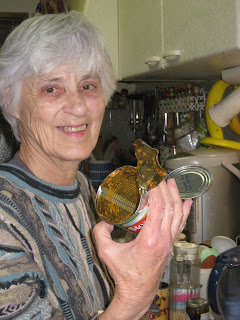 Now, in the "old" days, we had a nice can opener that you hooked in the top of the can, and using a pumping motion, moved around the edge, cutting tie lid as it went.

I think that was tossed out when my husband found one to buy with a right-handed turner. Well, I dug it out and clamped it on the top of the can and it went along for about an inch.

At that point, it would go no further.
Oh well, I had another one that might work. The second one had a red turner and came down from the top ... a little more both-handed ... but after cutting about an inch and a half, it quit too.

Hmm, well, when Marie had come for Paul's memorial service, she had bought me another can opener. A pretty green one that I had not been able to figure out how to use.
There is also a problem with the lids of cans changing in style over the years ... in fact, Norie had commented about the can of pumpkin not having a pull-tab lid. OK, now we are on opener three.

Oh my, this lid is a mess ... no way I can cut through that! Oh, for the good old days! I pulled out the bottle opened and pried the top off with the little triangular point. A bit hard to get the pumpkin out into the mixing bowl, however.
At last Norie was able to get the newest cutter to work and take off the bottom of the can... Well, she is right-handed so I guess she will have to come over next time I have a can to open.

It was not the only can either because there was cranberry sauce in the next can.

The rest of the meal went as planned. 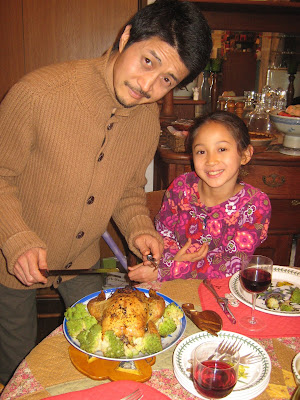 Leia and Hiro carved up the mini-turkey ... chicken.

garnished with some new-to-me flowery broccoli - cauliflower.
And for dessert ....
Ta da! 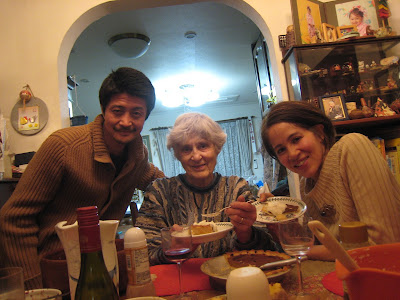 "One, two, three, smile." says Leia, and pushes the button.


Now the pots and pans and the dishes are all washed and put away,
but there are fun memories of the day.
The can recycling is next Thursday.
I wonder what the neighbors will think if they see that mangled can in the recycling bin. 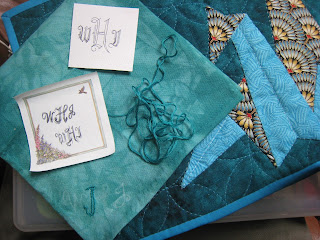 And now I am trying to embroider Wally's initials on the napkin. (trying not to make the back side too messy. There is something to say for those machines where you just type in what you want and push a button.
But then, I will have plenty of time to work on this, surrounded by left-overs. Yummmm!
Posted by Julie Fukuda at 12:42 AM