Friday was another cold rainy day but the Bible quilt class made up for that. The women were just wonderful and put up with my lousy Japanese.
Oh wish I had remembered my camera. We talked about choosing fabrics to go with the feature fabric and selected prints for two blocks, The Garden of Eden and Children of Israel. Then we took out those templates and the women traced and cut the pieces. We laid them out and with everyone' s help, the first block was finished.

While they were working I laid out the feature fabric and cut the two long borders. It was so nice to have space to lay it out and measure four or five times before cutting.

We finished up with a yummy cake our hostess had made. Then I set off to the bus stop in the wind and rain for home where I changed into my Scout uniform and picked up the second set of bags to run off to my pack meeting.

Well, I wasn't exactly running, those bags were very heavy, all kinds of tools and lead fishing weights and a small stove. We donated our pack time to adjusting the weight on each car and explaining how the derby would work Saturday so they would know what to expect. I was pleased with all they accomplished. I got a ride from one parent most of the way home so I didn't have to juggle the heavy bags and an umbrella on the return trip. 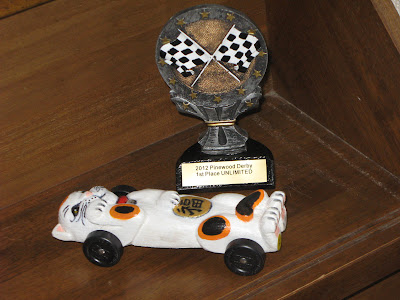 After a quakey night with wind howling and rain beating on the roof, I got up early to lug all my stuff to the car. I had one more heavy bag added to the collection so my husband and Nikko came to the car to help me. (The car is parked some distance away). Imagine my dismay to find that one of the doors had not been shut all the way and the battery was dead.) By then it was snowing big blobby wet drops into the standing water from the previous three days. The traffic was moving at a snail's pace and there was no way I could get someone with a jumper cable at that time of day.

I went back to the house and discarded as much as I could to make the load manageable and set off by train. Paul and Nikko came with me to help carry the stuff to the station. If I had arrived at that time by car, there would not have been a place to park but I had plenty of time to help get things set up. Of course, the first thing I did was to get a big paper cut on my thumb. (Now two thumbs out because I burned the other one the night before). Until the race began, I was in the pit with the graphite and wheel tuning department, a very messy job)!

My car was entered in the open competition and I stood at the end of the track calling,"Here kitty, kitty, kitty, kitty"! Well, that lucky cat must have been better rested than I because she came in first in each heat and won with the all-over best time. My boys had a good showing as well with my new Tiger cub taking all-over fastest and going home with a big trophy and an even bigger smile.

Last year, our Pack race was scheduled for March 11 and the earthquake cancelled that out. Another pack was scheduled two days later which also had to be cancelled. To make it to the district race, we decided to combine efforts. It worked so well we decided to do it again. We invited a Japanese Scout Pack to join as well and it was a lot of fun. We had also combined our rough-cut days giving boys two opportunities to take advantage of the power tools and adult help. The Boy Scouts were holding a merit badge day at the same location and I got a ride back to the train station. The rain has let up a bit.

Tomorrow will be another early rising for some special music at two services. The piece is a-capella and we will stand in a mixed group rather than with parts. I'm so lucky to be one of the two tenors selected as the piece is so beautiful.

Sometime before 3:30 Monday morning, I hope I can get the car battery back up. Next time I lock the door I will have to check the dashboard lights to make certain all the doors are completely shut! Last time this happened it was because the car had been borrowed and that person didn't know there might be an issue. This time I should have known better! Lesson learned.
Posted by Julie Fukuda at 10:43 PM