A quick break from quilting ... for Hina Matsuri. This year I brought out the doll case with an assortment of prince and princess dolls. When the kids were young and space was not an issue, we set up an entire tiered display of all the court dolls and their trappings. With only one canine daughter in residence, and considerations of time and space, this small display seemed to fit the occasion a bit better. 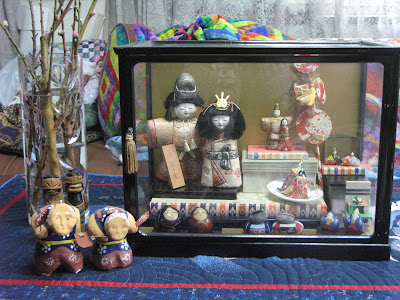 Guarded by the dragon runner is the case with an assortment of doll pairs, lacquer, fabric, folded paper, and even piled stones with painted faces and clothing. In front of the vase are two carved Ainu dolls and bobble-headed ojiisan and obaasan.(I have days like that myself).

The traditional peach blossoms are barely any farther opened than those plums outside in the cold. It seems even the local flower shops couldn't coax those flowers out and farther than the weather man.

My A1 chef of a husband began preparing chirashi-zushi the night before
and made enough for me to take to a meeting in the evening. It was a bit sad with family so far away but #2 son called and in the background was the sound of a music box playing the tune of the Hina Matsuri song and the words came to my mind.

My son told us he had gone to his daughter's school and taken the main Hina dolls and explained the customs and read a story to the children. Imagine that! Little kids in far off Washington D.C. learning about Japanese customs. When I was his daughter's age we were tossing stones in a big dirt pile in someones yard saying, "Bombs over Tokyo"! I had no idea what that was all about. The Ozawa Art Gardens had the most beautiful flowers and bonsai trees and everyone was so supportive as Mr. Ozawa kept a low profile and let his wife run the shop so he wouldn't be whisked off to some detention camp. My best friend left her china dolls at my house because she was afraid that her father would smash them along with other dishes and things that said,"made in Japan" on the back.

My husband had similar play but tells stories of kindness between his own father and POWs. I think we both grew up in families where people were valued and relationships were more important than governments. 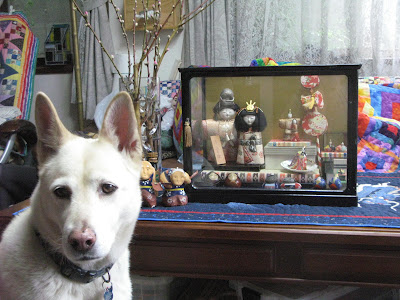 So... Happy Hina Matsuri little canine daughter. I'll bet Papa slipped you a taste of the leftover sushi. That face is just too hard to resist.