First, I need some take-along work. My #1 Daughter asked me to make something for her daughter's school fund-raiser. Hunting through my fabric, I found this panel with rabbits. I probably bought it several years ago to make a table runner for the rabbit year. Well that year is now gone and it won't be back for 12 more years. I may not even make it another 12 years myself so may as well use it now.

Wednesday's train ride and long District committee meeting provided time to piece a border out of yukata fabrics. Today it is basted and I began to quilt the waves on the trip to and from choir. 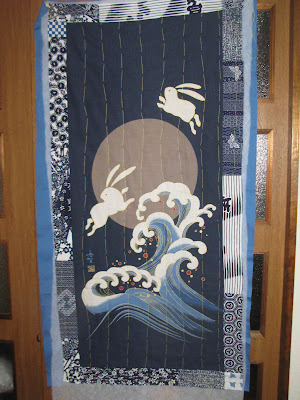 It may seem strange to see rabbits jumping over the waves. In Japan, when you look at the face of the moon, it is not a face but a rabbit pounding mochi. In the fall during the harvest moon, it is not uncommon to see pictures of rabbits and moons and on the East coast the full moon is rising above the waves. The rabbits just come with it.
I will probably quilt a wave design in the background like I did the dragon unless I can think of something simpler. 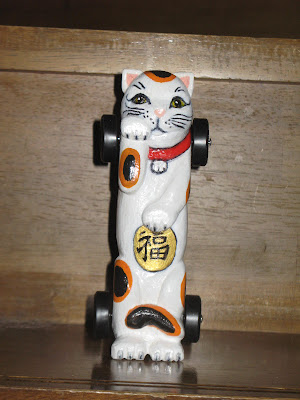 The other project I had to get done is my pinewood derby. Each kid gets a block of wood and four wheels to make a car. Tomorrow is my pack meeting and Saturday we will race the cars. I make a car every year and challenge the dads. That way, they will let their kid make his own car and if they want to compete ... I'm the guy to beat!

This poor cat was a hurry-up job and looks like it. I tried to make a maneki nekko, a beckoning cat, ushering in good luck. (the gold piece says "fuku" or good fortune). The block of wood size and shape, and placement of the wheels determines the shape and size of the design. I had to whittle it out yesterday and get it painted today. I really needed another day to get it sanded better and the pen I used for the thin black lines was not as waterproof as it claimed because it ran all over the place when I put on the acrylic varnish. I had to re-paint the white and use a brush to re-paint the lines. Because of the rough texture it was not so neat.

Every year the kids look forward and guess what I will make for my car. I am certain they will not be as critical as I am.

Tomorrow begins my class on Bible quilts. It will be a quilt-as-you-go class with everyone participating to make a quilt . I think it will be for their Church bazaar. I had hoped to have more time to do prep work but it looks as though they will learn to trace patterns and cut for themselves. Maybe that is not so bad to learn from the very start. I bought the focus fabric and a bit if coordinated prints and solids. Two other members will bring some from their stash so it is probably a good thing we will begin everything tomorrow with the whole group. At least they will be entertained by my crummy but serviceable Japanese. I will report the results if they are not too embarrassing.

Now, before I am off to bed, I shall make two piles. One of everything I need for the quilting and one for the pack meeting that follows. Hopefully I grab the right one when I go out. The ladies might have fun with a pinewood derby but the Cubs probably wouldn't care a whole lot for quilting!
Posted by Julie Fukuda at 4:24 AM