Side trips and progress report 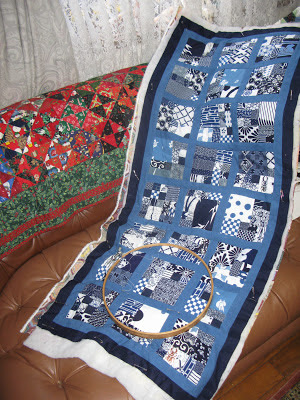 Quiet quilting at home has brought me to the last two rows of the + and X blocks. The big hoop will center those bottom two rows so I am moving around the edge, four blocks at a time. The end is almost in sight. At least it should be ready for binding before the end of winter.

The blue runner is also enjoying a dark blue sashing. Thanks to all the advice from blogging friends. This is my take-along work and making some progress. I am still thinking about the binding and possibly using some dark blue yukata fabric  for that thin outer edge.

Meanwhile, I got together with another member of the auction quilt committee to plan the next move. 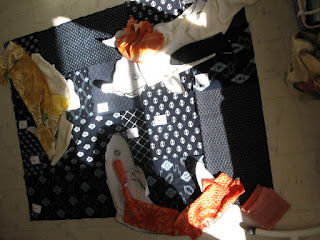 Well, this is a bit hard to figure out, but those are big carp. I enlarged the chosen sketches and we laid them out with thoughts of what needs to be done next. There will be a lighter blue inner border and a wider outer border... maybe a wave print in a dark blue. While that is put together, we will get the carp ready to applique over that beautiful kasuri.

At least that is the plan. Knowing how I hate last-minute tasks, I am beginning to feel better about this project. 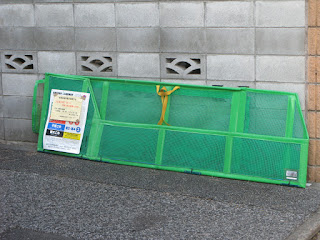 Thursday afternoon, I had to take my car for its half-year check. The place I go is in my old neighborhood so Nikko comes with me and we walk down our old street, past our house to the park along the river.

Sometimes we meet old neighbors.
Always we notice changes in the area.

The first change was this big green item. It is something I had been advocating while living there.
This green screen opens up into a big square box in which to put trash on collection days.
The collection site was right in front of our old house. In those days, the trash was piled in plastic bags and covered with a large green net. The public was supposed to tuck the net under the trash bags and many living in the houses there did it correctly. The problem was the apartment dwellers who tended to have small bags often containing unwanted food. Those bags weren't heavy enough to anchor the net ... and usually were just tossed under with no thought. The problem was the Jungle crows. They knew where to hang out and they could easily pull out those light bags and rip them up all over the street. It was the home-dwellers that ended up having to pick up trash every collection day and I can say I certainly did a lot of cleaning up because others in the neighborhood were at work during the day or just too old to get out and clean the street.

I remember more than one person complaining that we had a "Crow problem". No... it was a "People problem". Crows were only taking advantage of the situation. I noticed the whole street had finally gotten these folding bins and the sound of crows was much reduced. 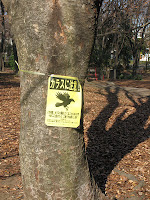 Nikko and I walked down to the park. When we lived there, we went to the park every morning where Nikko could run and play with other big dogs. The owners stood and talked and enjoyed the fellowship as much as the dogs.

Nikko had lots of smells to check out.

Right inside the entrance, hanging on this big Keyaki tree was a sign. It says "Beware of the CROWS"! Hmmm, maybe without garbage to attack, the crows are attacking people? 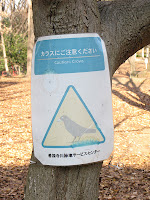 And here is another!  It even says "Caution" in English.


Well, when the young crows have fledged, you really need to be careful. You may not even realize they are baby crows because they are so big, but if you accidentally near one on the ground, you will be attacked by the parent that will follow you all the way home pecking you on the head! Not a fun experience. 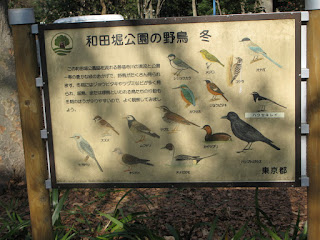 Wadabori Park stretches along the bank of the Zempukuji River.

Like the majority of rivers in Japan, the Zempukuji
is encased in concrete. During heavy rains, this river can rise to over a meter  above it's banks, flooding roads, bridges, and near-by homes.

Over the years, as people move out, the city has bought up the properties and turned the acquired land into park space. Some will be evacuation areas in case of an earthquake. The city has put large tunnels under the baseball field to take in some of the river overflow during storms.  Though rather engineered, it is a nice big park with attractive wildlife.(mostly birds) This sign shows the birds that winter in the area. On weekends you can see scads of men with their telephoto lenses taking pictures of the Common Kingfisher, a flying jewel of a bird. In the early morning there was always a group doing Tai Chi. There are stocked fish ponds and a bicycle course park for kids. Joggers are found at all times of the day, trotting along the river bank trails.

Nikko and I walked along the bank and saw many more birds than on the poster, Too bad I do not possess my Daughter-in-law"s skill in bird photography. I did see plenty of moving targets to practice on. 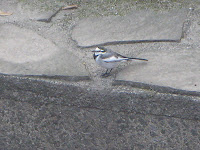 Here is a Japanese Wagtail running along the river embankment. 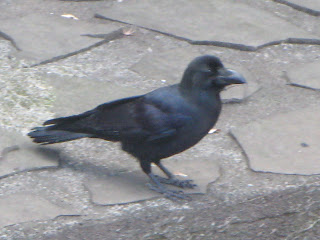 And one of those huge Jungle Crows wondering if I will drop some trash. 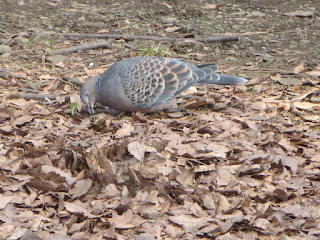 A whole family of Rufous Turtle Doves was along the other side of the path turning over leaves and looking for goodies.

They hardly blinked or stopped their work when we walked past. 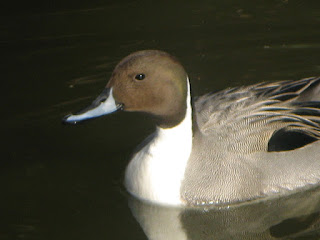 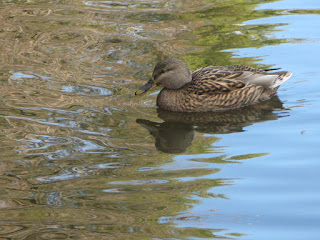 The female was not far behind. 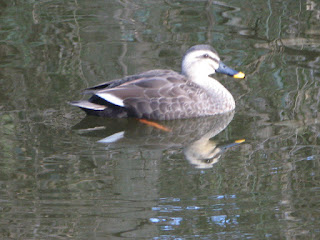 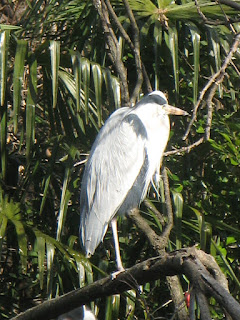 And a whole family of Gray Herons were busily grooming themselves in the trees on the small island.

Those weren't even on the poster.


An Azure-winged Magpie was dashing in and out of the branches below the herons.

In fact, I saw all the birds on the poster but the Daurian Redstart  and I know he hangs our along the back road so, if I had had more time, he would have been checked off the list as well.

I grew up on the edge of the Euclid Creek Reservation, East of Cleveland and nature was so much a part of my life. It is probably the thing I miss most where I live now.

Nikko and I walked back along the river and through our old neighborhood. We met and talked with two past neighbors. 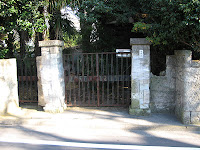 The gate posts of one of the homes that were destroyed in the earthquake are slowly being repaired, The mailbox is hanging on the gate and the hole in the limestone block wall is where it used to be. 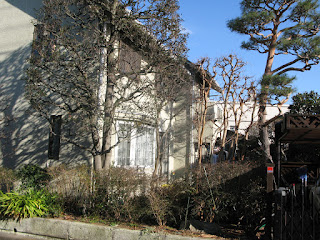 The house where we used to live is still enjoying the lovely winter sun that warms the whole downstairs. Oh, how I miss those sunny rooms and that spacious garden! 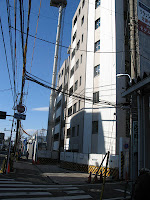 And, on the corner of our former street, the apartment building continues to rise where a parking lot once lived. Luckily, the tallest section is along the main road so the homes will not have their sun cut off as much as expected.

The neighbors are wondering how the area will change. Certainly the building of all these apartments will add to the crowding on the trains to downtown. This train line has been one model of politeness, with seats offered to elderly and handicapped passengers. The anonymity that apartment dwelling brings may bring changes to that line as it has to the one I live on now. Even with seats marked "Priority" and regular announcements on the train to that effect, it is almost impossible to get a seat ... unless you live in the terminal station and are willing to stand in line until the next train arrives.

The car was waiting, having passed it's check-up, when Nikko and I returned to the shop. The joy of driving is that Nikko can go with me and we both can sit. I can't piece or quilt when I am driving but I can sit!
Posted by Julie Fukuda at 8:22 PM

Email ThisBlogThis!Share to TwitterShare to FacebookShare to Pinterest
Labels: Blue and White