For once this has nothing to do with my quilting unless I can count it as an interruption. 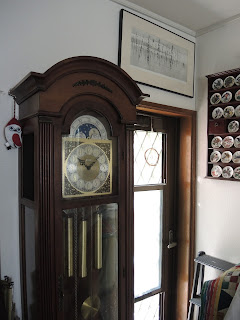 Some of my blogging friends have asked me about the quake that occurred on Saturday. (it must have made a bit of news elsewhere)

Considering the quake took place about 630 miles south of Tokyo and at a depth of about 678 km, (about as deep as the
pacific tectonic plate reaches), at a magnitude of 8.1 it was felt over the whole of the Japan archipelago.

No tsunami were triggered by such a deep quake and no life-threatening injuries. In Saitama, a woman in her 70s got a head injury when a ceramic plate fell from a cupboard, and in Kawasaki a 56 year old office worker fell and injured his ribs. In Roppongi Hills shopping and business complex, the elevators stopped and about 200 people who were viewing the Star Wars exhibit in the Mori Tower, had to climb down the stairs from the 52nd floor. Of course trains were stopped for some time, causing inconvenience and confusion for travelers who rely heavily on trains.

Paul was in the kitchen when I felt the beginning tremors. "Looks like we are having a quake" ... but he didn't feel anything. It took a bit of time for the shaking to build.
In the Fukuda household, we usually judge the size of a quake by the clock.  Our grandfather clock that stands by the east garden door seemed to be still swinging but my husband came into the room and turned on the main Japanese TV channel to get the rundown. They instantly have a running bit telling the epicenter and magnitude in various parts of the country and tsunami warning if any. If it is a "big" one, they stop the usual broadcast to show reports from various locations and report on train stoppages and the like. Judging from our clock, things were OK. But then again on second glance, the clock had stopped.

Meanwhile, as the news report ran on and on showing videos of shaking buildings and offices downtown, there was a sudden bonging from a second clock hanging high on the north wall. 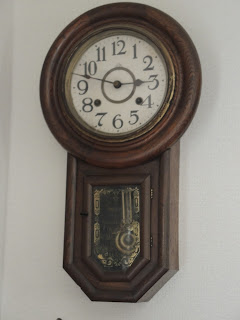 This old clock had kept stopping during the 2011 quake and aftershocks. Finally, instead of climbing up and re-starting it, we just gave up and left it quiet.

We had a good laugh that the quake that had stopped one clock, had started another. AND, it is still happily going. I shall have to climb up there and set it at the proper time.

So ... does the clock that started cancel out the report from the one that stopped?

Does all the recent activity from volcano eruptions and earthquakes mean the "big one" is coming ... or does it have more to do with the geographic location of Japan and the quiet we experienced leading up to the 2011 event? 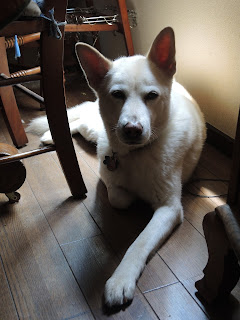 Well, just in case, Nikko thinks it is a good idea to sleep under the table.
Posted by Julie Fukuda at 7:28 PM

Email ThisBlogThis!Share to TwitterShare to FacebookShare to Pinterest
Labels: earthquakes