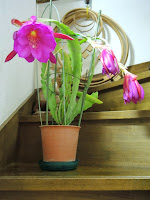 After a frustrating week, I was beginning to think I would never be able to post new pictures again. Oh, there were new pictures in my camera, alright.

BUT ... the system I had been using to download them to the computer had disappeared ... or hiding ... or gone into stealth mode.

Even the sign-in when I opened the computer had changed. THEN ...
about Sunday, when I opened my laptop, I got the sign-in format I had been expecting ... well ... once, but before I could get my camera and see if the download function had reappeared, I had to shut the laptop and go somewhere. When I returned ... the earlier format welcomed the opening.

Well. there still might be hope ... so I decided to see just how long the hold-out might happen. Oh, a couple of times I did get the format I was looking for but it was a part-time thing. 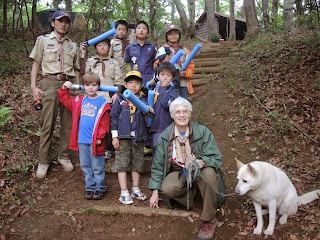 
Camping with the Cub Scouts, for example...

I had the fun of leading the nature hike.
We did an alphabet scavenger hunt (6 one-hour hikes) and two groups managed to find a full alphabet in creative ways. The items had to be in nature and able to see or hear and identify.

Usually on these events I do the crafts but the projects (which you can see in the hands of the boys) was "Light Sabers" which quickly turned into weaponry. With a light stick inserted, they could even  whack each other in the dark of night. No thanks, I'll go with nature study or nature crafts. Nikko said she could do without the whacking too, even if she was not the whackee.

Friday, the new Friday group met at a home with a huge (to me) open space of wood flooring. I was so happy to lay out my quilt, which was now quilted in the ditch on all the blocks, and mark the sashing for quilting. 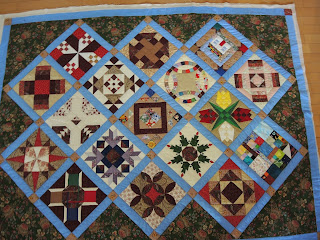 Now the quilting is more than half done in the sashing. See what can happen when I am avoiding my laptop? Once I get that done. I will think about what I want to do in the larger areas. (Well, I am thinking now but haven't made any decisions).


I think it was Tanya who suggested I just turn off the computer and leave it a while. I don't know if that did the trick but...
Finally, yesterday the old format returned on a regular basis so I decided that if it was still that way today, I would try the camera download. 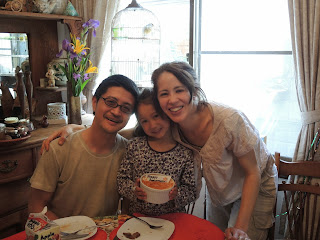 Well, what I got was not exactly what I expected.

(That is the "kinda maybe" part)
Usually the computer recognizes those shots that have already been downloaded ... but this time it re-downloaded EVERYTHING in the camera.
I really don't need a thousand duplicates taking up storage space ... and I sure don't need to thumb through all those tiny pictures looking for what I want ... but hey, at least I can add them to a post.

So, now you can see my big Orchid cactus flower as the pot sits on my stair steps. I'm glad I didn't miss all three flowers as they open at night and only last two days.

My marked quilt is on the big floor (with no dog hair) and yesterday Norie, Hiro, and Leia stopped by to celebrate their anniversary and borrow my van for a trip. I hope they go safely and have fun. This is "Golden Week" and the traffic is bound to be awful. The flowers on the bureau were a gift from the rice store lady. I just had to admire her beautiful garden while I was using her room for basting, and knowing how much I love the flowers, she has brought me several donations. 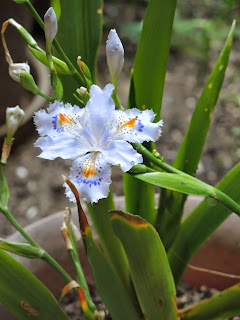 This little iris-like flower was also a gift.

She thought I might like to plant it in the weed lot I am taking care of, but I would feel so bad if someone was to break off the flowers the way the tulips were destroyed.

I divided them into two pots and will see where they do well by moving them around the garden.

Today this friend came again with two more of my favorite plants ... lily of the valley and something called "shiran" in Japanese. It is kind of a wild orchid. Those will soon find their way into my shady garden plot.
I am sure she didn't find it easy pulling out these tuberous roots but I feel so blessed to have such a friend who knows how much I love those flowers and shares hers with me.

The time has come to make a quilted object for her. One more thing to think about while I sew.
Posted by Julie Fukuda at 8:37 PM