The feathers are flying 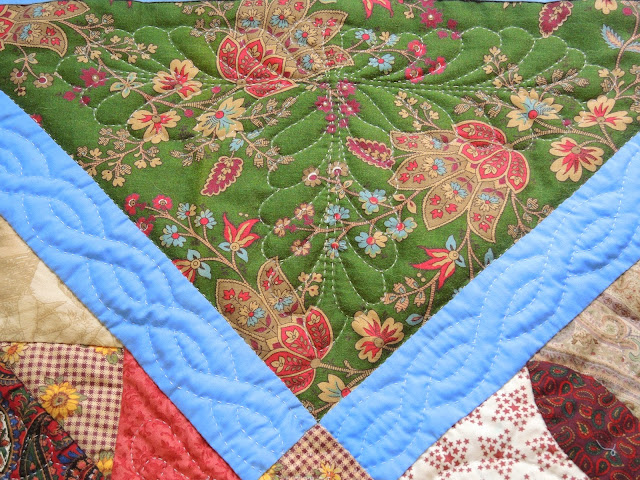 Well, here is the pattern I drafted to fill the triangular parts of the border. It doesn't show up very well against the print but I think it will work out OK.

I wonder if I need a small bit of quilting in the open area on the sides.
I rather like quilting feathers because I can use a very long piece of thread and do not have to stop as often. I have two triangles quilted already and am finding the best way to order the sewing so that it goes quickly. Of course,being along the edge makes it a bit easier to handle too. 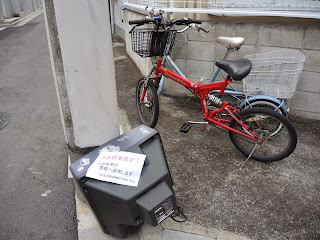 I was communicating with my blogging friend, Cassandra, who has been tidying up her place and getting rid of things and organizing others.

I, too, have been sorting and trying to get rid of stuff that is taking up space and am stuck on three items.

One is the infant seat I picked up at the church's flea market. Another is a dead computer of my husband's that is blocking my cupboard door. And another is a dead printer my husband has piled in front of the computer making it impossible to open the cupboard at all.

I remember back in the stone ages, the first TV that entered our house was something my kid brother picked up on the curb. It had caught fire and was waiting for the trash collectors. He brought it home and restored it and my mother allowed it to stay.

What you see in this picture, sitting in front of my tricycle and Paul's red bike, is an old TV with a note attached. About a month ago, a shopping cart appeared in this area. It was soon followed by the TV. Finally, the apartment owner took the shopping cart to the main street and found a store it might belong to but the TV is altogether another story.

These days, when you buy an electrical appliance in Tokyo, added on to the price is the cost of disposal. This TV, like our old computer and printer were purchased too long ago.
There is a system to pay to dispose of large items.You pay for a ticket to stick on the item and call the gomi place and they will come and pick it up. Of course you cannot set a bed or sofa out on the street so you need to be home when the truck arrives. (and if you live on a street like mine that is too narrow for the truck, you have to lug it to the place the truck waits ... and I have done that with a lounge chair while two big hefty guys stood and watched my struggle).

BUT ... the TV cannot be trashed... even though it was dumped by an unknown person.You can't pay to have it removed. SO ... my husband calls our local Ku office to get the city to remove it. They come out for a look, BUT ... our street is really just an ally and this TV is setting on "private property" because, until this tiny narrow street is turned into a wide street that cars can come down, it is a no-man's-land and doesn't belong to our Ku.

This lane was a dirt path fifty years ago and now it is paved. the street in front of the light pole has curbing and a drainage system but our side of the pole where the TV sits is only a part of "Greater Tokyo" where no one is responsible because it is surrounded by Nerima-Ku.

When we lived in Suginami-Ku, I used to run Nikko to the park along the river every morning. I was often surprised to see piles of trash ... furniture, appliances, bedding, all kinds of junk ... dumped along the edge of the park. (in the dark of night)

I am feeling great sympathy for those dumpers. Just think ... if I am moving house, I would not be there to wait weeks for the paid gomi truck to show up. If I had a job, I wouldn't be able to be there either. And if the stuff was electronic and old, no one would take it. We can't even move that TV to the larger street because the Ku office took a photograph of it sitting in this no-man's land. AND, this may not be the end because someone has figured out a place to dump their un-wanted stuff, Maybe the shopping cart was the first test.

Now, if I could take a saw and cut the unwanted stuff into smaller pieces, I might be able to slip it little-by-little into the un-burnable trash that is collected once a month... maybe hide it in a broken flowerpot ... I really would like to get my clean tablecloth out of the cupboard and change the runner on my coffee table (that has been there since Christmas)!!