Sometimes it seems the faster I run, the behinder I get.

It seems every weekend I have to pick and choose my priorities and something is bound to get left in the dust. Today there is a boy scout Merit Badge day, and probably the first one in years I have missed. That is also doubled up with a outdoor leader training that I have also declined to help on.

I don't know who is going to do the nature section of that training but the materials I have assembled over nearly 40 years would not work at the chosen location. In addition, the training which is supposed to include an overnight has been shortened to part of one day. How can we teach scouts to go by the rules when leaders (and the executive in charge) are cutting corners? Yes, he gets more "trained leaders" to his credit but... which comes to merit badge requirements ... where a scout is expected to "tell" or "explain", the leader does the talking and signs the kid off.

Anyway, Sunday afternoon and evening I have a pinewood derby to manage ... with a new track and inexperienced leaders. I think for one weekend, that is enough. And ... next weekend is the district pinewood derby but since the "Gate List" is closed (as it is on a military facility) none of the civilian packs will be able to attend ... they need to know the names and details of attendees (winners) 60 days out... before we even run our own pack events.

So ... besides whittling my derby car, what have I been up to? 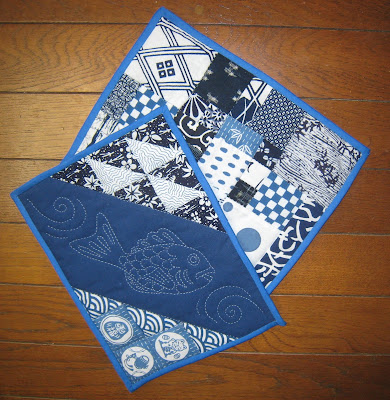 At the end of each teaching day, I walk downhill to the train station at
"the Ju-ban"

That is, as in Azabu-juban.

Along the way I often have stopped at the shop. Blue and White,
not so much as to shop but to have a bit of a visit and look around.

This little shop with it's charmingly decorated show window has been an icon in the area for many years.

Recently, the "Peacock" grocery store on the property was taken out of the building and new shops were put in.

Amy Kato, who owns the Blue and White was told ... after all these years ... that her shop does not meet building standards and was to be torn down so she had to move.

As I have said, that shop is an icon of the area  ... so where was she to move too? Well, the shop closed and the building was torn down ... but a sign on the fence declares it will re-open in April on the second floor of the renovated building. I do not know all the details but I hope they will get a show window and be visible still to passers by.

I have known Amy since the early 70's as her husband and mine worked at the same company. I wish I could afford a big bouquet of flowers for the opening, but when life gives you scraps, you make quilts instead.

Thus two mug rugs ... hoping they can use them for their tea or coffee or even a glass of celebratory wine. 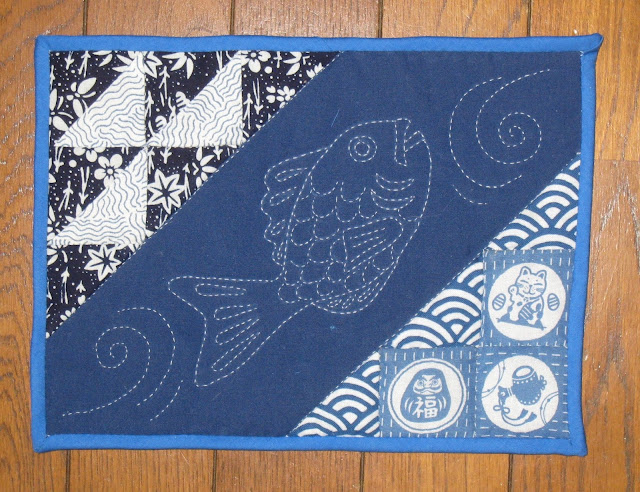 For Amy, a tai, or sea bream, regarded as a celebratory fish and is often served at ceremonious occasions. In the upper corner, a birds-in-the-air block representing the new location on the second floor, and in the lower corner below the waves are a daruma wishing good fortune ... always rising from a fall ... a good luck cat, (I think those are coins it is tossing), and a mallet of good fortune. Amy's shop is known to hold lessons in sashiko but since I have never taken any, ordinary quilting will have to do. 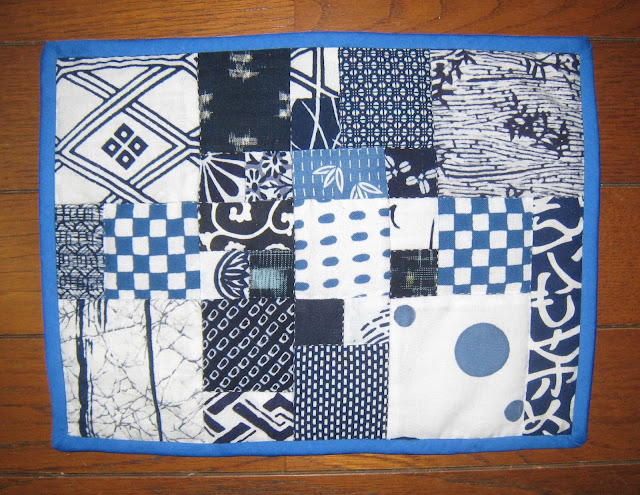 For her assistant, I can see her jumping up from her work ... done in bits and pieces ... while greeting friends (often with a hug in my case). Over the years bits and pieces of yukata fabric from the shop have gone into ASIJ quilts and also my stash, so her little mat will get a selection.
For some reason I had trouble making the binding behave but at least I had enough to bind two 8x11 inch mats. 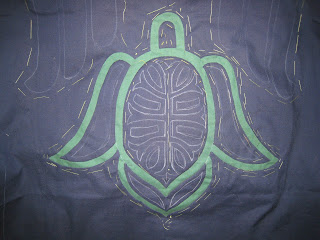 As for mola, it is now creeping along at a turtle's pace. Under the green is a lighter green ... kind of reverse of the regular molas that usually put the lighter colors on top.

I'm not at all certain where I am going with this and maybe that is why it is moving so slowly.
My original drawing crawled off to some unknown place.
In most cases when this happens, the minute I go to the trouble of doing a task over, the original reappears. BUT, this time it seems to be gone for good ... along with the color plan. This is definitely not what I had in mind at the beginning, but now I hate to start over once more.  I guess if this is a learning experience, I should be happy ... that is ...  if I really have learned how NOT to make mistakes.
Posted by Julie Fukuda at 9:13 PM