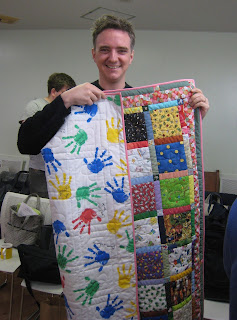 Sunday, after the first service, the choir presented the signed quilt to the new father-to-be.

Nick is a fellow tenor and his baby is expected this week. He was playing I-Spy before the quilt was unfolded. I'm sure the quilt will be enjoyed.

Without returning home, I went to the Tokyo American Club, the sponsors of our Cub pack, to await the arrival of the awesome adult leaders coming to set up for our pinewood derby.

With a new track and all aspects unfamiliar to everyone, we somehow managed to pull off the event.

My car was used to test the track and the first two runs it flew off the track. Luckily, most of the bumps in the tracks could be adjusted and at the end, volunteering parents moved in to hold down the offending segments.
I couldn't help thinking of the "old days" when we had a wooden track. Somewhere along the line we were able to add a finish gate to make judging more accurate. The new tracks have had problems with where tracks are joined, needing greater technical skills and time to set up. Sometimes "new" is not all that much better.

Some of the technical details did not like the computer we were using and so not all went smoothly but the crew was able to make do.

My little car ran in the open competition. 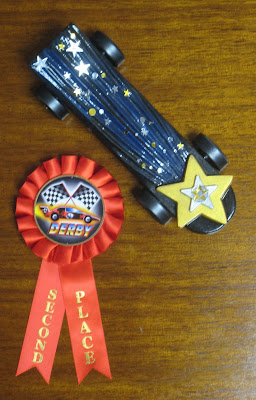 This section of the race was designed to give adults and siblings a chance to make a car and join in the fun.

This year, there were only three entries and other than my Shooting Star, the other two were made by scout sisters.

One of the girls made a very nice decoration on the block as it came from the box. As it turned out, after adding the wheels, the car was way overweight.

Though one of the fathers tried to cut off some wood on the underside, we just didn't have the tools. I decided to let the rules be bent so the car could run as is.

Not surprisingly, that car came in first in the open but it wasn't that much faster than my star.
I recalled sitting on the sidelines of all the scout events my brothers took part in under my dad's leadership and cheered along with those sisters at the results. 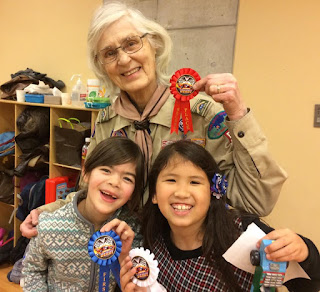 Here is the picture one of the mothers sent.

Do they look happy?

I think nearly every scout went home with some kind of award for their hard work, thanks to the time and efforts of all those parents.


And.... I might add ... they stayed to clean up and put things away. The room was cleaner than when we arrived (including the graphite corner) and we finished before the scheduled ending time.


Monday was a holiday ... the vernal equinox ... but the homeless got their onigiei with a bit of help from a friend who joined me at the pick-up spot. Our school had a regular day ... except I did notice a few more fathers coming for pick-up after school. Next week will be our "spring break" and if I was looking forward to some spare time, my calendar is filling up those blank spaces.
We shall see how much gets checked off the next list .........
Posted by Julie Fukuda at 11:08 PM