A sad and troubling time ahead 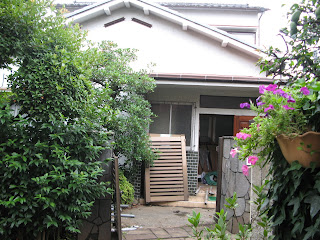 Tuesday, in the poring rain, a man came to the door while I was babysitting my granddaughter.
He brought a notice that tomorrow he would begin to tear down the house across the "street".

My neighbor and I both gave birth to daughters on the same day over 45 years ago and have been friends since then. In February she was hospitalized and since being released, has gone to live with her daughter. During that time I have been taking care of her beautiful garden. 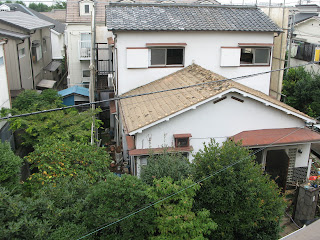 Many pictures of my quilted runners and banners have been taken hanging from her gate, now ripped off the posts and leaning against the front window.

I asked the man about the garden and he said everything goes ... the whole lot will be cleared.

I went out in the rain annd brought the potted plants I had been tending over to my garden.
(Though I hardly have room for anything more).

When my daughter returned from her work, we both went out again in the rain and removed some choice plants for her to take back to her yard. 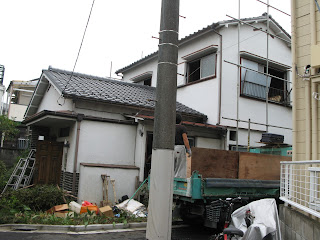 Early yesterday morning, there was the beeping of a truck backing down the side ally and then the sound of a chain saw. Down came the beautiful tree full of kumquats, the gardenia bushes, and the trees and hedges.

Then men began tossing furniture and belongings into the dump truck that had backed in.  Later in the day, my daughter and her husband went into the house and rescued some more treasures from the trash dump. I couldn't bring myself to enter but I saw kimono boxes and bedding and all kinds of things that could have been given to the Salvation Army store or Goodwill. My daughter saw old family pictures being junked. They saved some shoji that could be used. some antique tables and vases and a hibachi as well as kitchen items our son-on-loan can use in his new apartment.  Today the men were back tossing belongings into the dump truck from the windows. Now I hear the sound of crashing walls and am rather glad I will be away at the Jamboree when the garden goes. 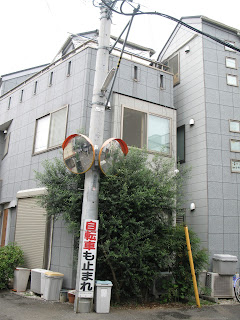 What I fear, is another construction like the most recent one on the corner of our street. One house of similar size was taken down and three houses were built on that lot. Those houses are all three stories tall and would block the last of the light to our home were they built on the west , two or three meters away from out gate. 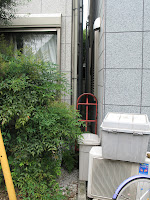 Note the space between the two houses. It might be 30 inches at the widest . The red fence id ine foot wide. 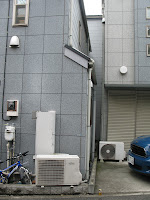 Here is house #3. That space between is also about a foot at the widest. there are windows along those walls but all are with shutters closed. Not much of a view, I would say.

These houses face a street wide enough for a car so include a parking area under a second floor over-hang.

I don't know what might happen on our tiny street. I don't know what would be worse, three or four houses like this, or a huge four-story apartment building like we already have across the street to the east. 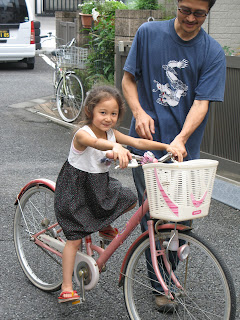 Here is Leia with a treasure she picked up before it headed to the land-fill.

Well, it is a bit big for a five-year-old... even one fast-growing girl with one wiggly tooth. With her Papa's help, she got in some road time.

We will have a few treasures to remember our dear friend but right now, I am feeling more than a little bit sad.

Quilt stuff tomorrow.
Posted by Julie Fukuda at 12:53 AM