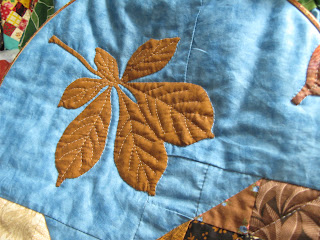 Since my schedule is tight, I really need to keep this going if I am going to take it to Oregon finished.

In the old days, there was a problem with batting shifting and the need for rather close stitching.

I think the "Thinsulate" batting I have used is really intended for use in clothing and I have never seen evidence of it shifting or pilling no matter how often it is washed.

The owl is a combination of two inch squares and half squares so I used a variety of in-the-ditch quilting. No matter how carefully I ironed and placed the batting, there were still some seams that flipped over. As much as possible, I use a sweep of the needle to right the direction but there are a few that just had to be quilted as they were. 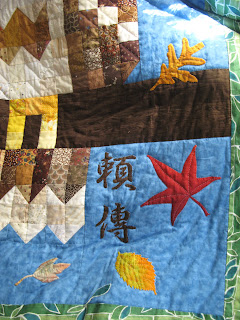 After quilting the owl, I quilted the kanji for Ryden's name, and starting there, have quilted all the appliqued leaves up the right side and am moving down the left.

There will remain several large areas at least six inches across that will need some quilting. My plan is to quilt in leaves. Most likely I will use large compound leaves over the tree branch and behind some of the other leaves.

So far I have used white thread and am toying with the idea of quilting those leaves in fall colors. I still have time to decide and I know white will show up just as well. 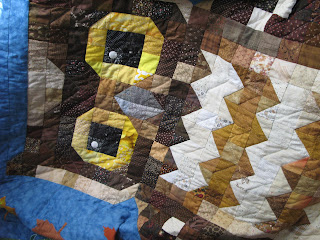 Mr owl is relaxing on the sofa, waiting for me to get back to work.

It is a very hot humid day ... not ideal quilting weather ... and more of the same is in the offing. Seven more leaves to quilt and then I will move on to the next problem.

I still am thinking about how I am going to quilt the borders. 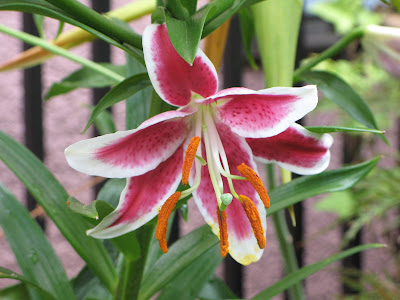 In my flower bed, the last of the lilies has begun to bloom.

The garden shop has a "point card" that gets stamped when you purchase something. That is common at many stores in Japan.
(the fabric store gives a discount to card holders, the pet store gives extra points on two days a month ... "1 1 or Wan wan day" (that is what dogs say when they bark) and "2 2 day Nya nya day" (cat language) and those points can be used to purchase something when they reach a certain amount.

The garden shop points have to be used within a certain time limit or they are lost. One October I was buying potting soil or some such thing and my card was filled up. Having lost the credit on an earlier card, I looked around as I was leaving and happened to see a rack with packs of lily bulbs.
I decided then and there to buy five bulbs while I had the chance as a birthday present to myself.

Those bulbs have been giving me pleasure ever since. They have an order of appearance and this purple one is always the last to bloom. It only has a few blooms but it makes up for that in sheer beauty. They don't mind the heat. They thrive on neglect. Who could ask for a better present ... even if I had to buy them for myself1
Posted by Julie Fukuda at 2:30 AM