Taking a quilting and blogging break

Tonight I leave for a week of Scouting.

The owl quilt will not be going. I may or may not have free time to work on it, but I don't think is is worth the risk. The information we have been given is that there is no electricity in the campsites.
Certainly quilting is not an activity to be done by flashlight in the evenings.

The area has had torrential rains for the past two weeks. It is a land-fill along the coast of South-western Honshu, and we have been told to bring boots and rain gear and expect mud.

The other item staying home will be my laptop. Certainly I will not do any blogging. I have been to other Jamborees where they had a computer center set up and the waiting lines for using the connections were around the block. I can read my e-mail on my "smart phone" (if I can find a place where it can be charged) I have packed a multiple outlet and my charger if I can find an outlet somewhere. (8 years ago, there were outlets in the bathroom for hair dryers and those were all taken up by cell phones).

August 4th, Paul and I celebrate our 50th year of marriage. 16 of those years, I have been away at a Jamboree for the occasion and many other ones, he has been away. I can only remember celebrating out 25th and that was because the kids made it special. It is possible we have spent fewer of those occasions together than apart. Today I heard him complain that I would be away and was a bit surprised he even remembered.  Now I am feeling a bit sad and guilty. 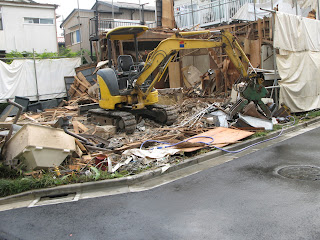 One thing I will not miss is the crashing and shaking still going on. We had a break yesterday because of rain and thunder storms. (well, I did. Nikko has not been happy with either choice).

On a positive note, one old guy living in the apartment  to the North of the activity, thinks that there will be a house built instead of apartments or multiple houses because he saw  a lady taking measurements to figure out where to park a car.

That sounds hopeful. The street is too small for cars to pass or turn around. When I need to put gear into my car, I have to either back in or back out. A garage or parking space at the corner of the property might make it possible to pull in and back into a turn to go out.

Tonight's trip will be by bus to the airport, where I hope to find a chair where I can sit until the group shows up in the early morning. The people who make up flight schedules don't seem to pay much attention to train and bus schedules. maybe they think those who can afford to fly, can also afford a hotel at the airport.

I'll miss all those posts coming my way ... BUT ... I will have plenty to keep myself entertained when I return.  ... and ... I will be looking forward with much anticipation.
Posted by Julie Fukuda at 1:47 AM