For once, I was able to finish reading our monthly selection during the month. Of course, since I owned the book and had read it once before, that was easy to do. Now I am waiting for the next book to arrive by post so I thought it time to come up with a block.

The Lover's Knot, by Clare O'Donohue was our book for June. With a block name for the title, I went searching for something to represent the book and came up with many blocks and block variations by that name. Most of them were in just two colors and I have only a small amount of my "feature fabric", a dark paisley print. I want to include a bit in each block and I also want to add a bit of color since what I can pull from that fabric is rather dark red, green, blue. brown and black. 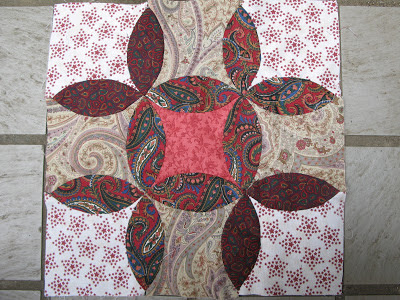 I found this version of lover's knot in The Quilter's Album of Blocks & Borders, by Jinny Beyer. and liked the fact it used more than two fabrics.

Interestingly, her illustration also included paisley print. The pattern was for a 9 inch block but it was not too hard to take a 12 x 12 piece of paper, divide it into thirds and, using a compass, come up with a template.

I can't say I am fond of piecing curved seams. but they didn't come out too badly. Those points were a challenge to iron though and I might not want to quilt through them.

I was going to use the floral tan I had used in the tulip block. Then I picked out a yellowish tan for the center. so went with a yellowish paisley print instead. 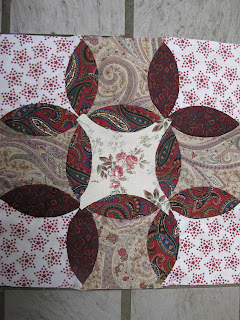 As I was putting the blocks together, though, my husband, who never pays any attention to what I am working on unless it is in his way, commented that the red-on-red fabric looked better.

I went with the red but thought the floral tan might have been better. To the right is what I first chose.
In some ways I kind of like that better, but I do like the touch of warmth the red adds and I am not going to un-sew and re-sew those curved pieces!

Next on the agenda is adding Kanji to the owl quilt. 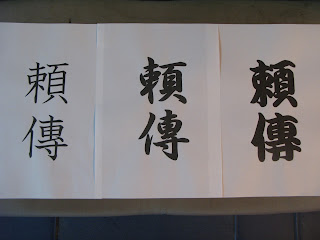 Here is the Kanji selected for Ryden.

The upper ideograph is "trustworthiness" or dependability or reliability.

It is the first character used for male members of the Genji clan.

the second character "den" was taken from an uncle who was a famous movie actor, so it carries on the re-cycling tradition in our family.
The character means "passing on" as in communicate or even passing on a legacy.

On the left are the characters as they might be written in daily life. The middle writing is in "Samurai style" and the third on the right is more "Kabuki style". For applique, the third might be a bit easier to do but with a family history of the samurai, I will go with the center plan. 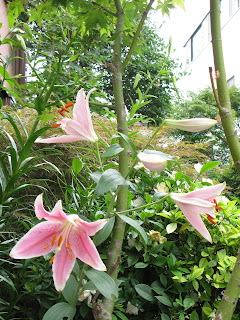 And in my little garden, with the orange and yellow lilies finished, the pink are having their time poking on front of the new maple and gardenias.

Every time I looked at my cell phone for the past two weeks, it reported the weather to be "showers"  ... the picture of a cloud with water drops spattering on the screen
and a wiper swishing across. Well, Mr.Google makes an interesting application but the only rain is just hanging in the air and would more appropriately be termed "humidity".

I also notice with the arrival of July, my blog list is still up and running ... or am I speaking too soon?
Time will tell on many things. Mr. Google, you are entertaining, if nothing more. (and I prefer that to screwing up my computer life).
Posted by Julie Fukuda at 9:03 PM